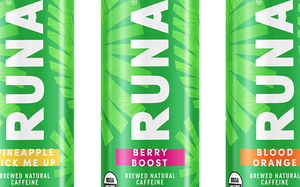 Runa is upping its game in the burgeoning natural energy drinks category this month with a new design and taste profile, while doubling down on ecommerce at Amazon.

“Energy drinks continue to be an explosive category, as consumers look for healthier choices,” AMI CMO Jane Prior tells Marketing Daily. “We believe that the energy category is really due for disruption.”

Runa is looking to appeal to older GenZ and millennial consumers who want a natural alternative to energy drinks containing artificial ingredients that provide a massive boost that can be followed by a crash or the jitters, according to Prior.

“I think it really comes down to the efficacy. Having great taste is not enough. You need great taste, refreshment and functionality.”

Until now, Runa had offered three SKUs with zero sugar and three with added sugar. It’s replacing those on store shelves and in ecommerce by rolling out one line of 10-calorie drinks containing 150 milligrams of caffeine plus organic cane sugar.

“What we learned last year was consumers really enjoyed the benefits and efficacy, but the taste profile had some opportunity. That’s why we took it back and synergized the lineup and moved everything to one, 10-calorie lineup and improved the overall taste profile for a better experience.”

Runa has seen its biggest success on Amazon, where the brand’s new push begins today.

“We’re putting a big investment in Amazon and all the tools and tactics available to us there,” says Prior.

She describes the natural energy drink category as “kind of burgeoning out of what was the conventional tea set, in many instances. At retailers, you often see us sitting next to premium teas.”