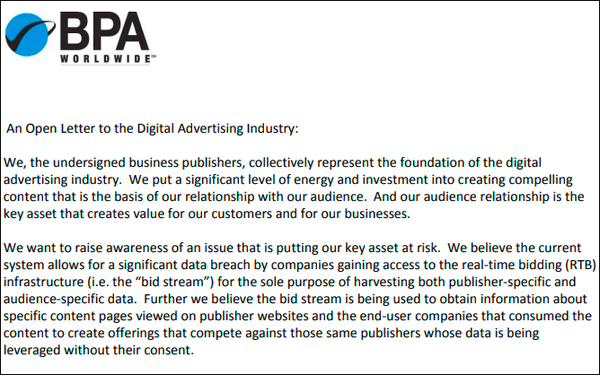 In an open letter being sent to the ad industry today, a group of publishers and tech companies are calling for a fundamental change in the way their audience data is accessed during open programmatic trades.

Specifically, they are asking that when they make their audiences available for real-time bidding (RTB), the data is no longer accessible to “third parties” who use it to create ancillary market opportunities based on the data.

“To be perfectly clear, without publisher permission, third parties have no contractual right to use this data to create derivative works from the very assets that publishers have spent decades and billions of dollars to create,” reads the letter, which is being sent via BPA Worldwide, a not-for-profit organization that provides third-party audits of publishers audience claims.

“They are being enabled by loose restrictions within some RTB platforms, which may ignore their responsibility and obligation to the publishing industry,” the letter continues.

The assertion raises interesting questions about who actually owns the so-called “bidstream” data -- the data that both the supply and demand side of programmatic trades use to enable bidding and ultimately, trades.

The BPA members are asserting the data is their intellectual property, but others have argued that once it is entered into an open RTB bid, it becomes “market data” that anyone in an open marketplace can use, including entrepreneurial third parties who invest resources to enhance the value of that data in order to create more demand for the publishers’ audience inventory.

“If it didn’t do that, there would be no market for it, because nobody would be buying it,” says Andrew Sandoval, director of biddable media at The Media Kitchen.

“What they’re demanding could be at the detriment of the auction,” he continues, noting that third parties create demand for publisher inventory that might not otherwise exist without the resources they invest to enhance it.

“If demand goes up, price goes up. And if the price goes up, everyone should be making money from it,” Sandoval explains, adding that it isn’t really the individual data of specific publishers that makes the market data valuable to the marketplace, but the ability to aggregate it across publishers in order to understand the supply-and-demand of reaching their audiences, and the scarcity value when they are delivering important, hard-to-reach ones.

Sandoval adds that it raises other interesting questions about who actually has a right to access the data and in what ways they can use it, noting that advertisers and agencies -- as well as their third-party technology and data suppliers -- use the data to model demand even when it doesn’t yield in an actual transaction.

In short, he says, it enables them to have greater visibility in the supply-and-demand of the programmatic RTB marketplace, because even if they don’t win a bid, they get to see what the bid ultimately clears at.

That the BPA is the entity mobilizing the call for change is also interesting, because such calls to action would normally come from organizations such as the Interactive Advertising Bureau or Digital Content Next, but BPA President-CEO Glenn Hansen said the initiative was raised by his members, because there has been growing concern that they are losing control of their data and that other third parties are making considerable markets around it without their authorization.

As for the timing, Hansen says it has been a sore point among the BPA members for some time, but many felt that the imminent demise of browser cookies by companies like Apple and Google would ultimately resolve the issue. But Google’s cookie death knell has taken longer than some had expected.

Even so, while the cookie still is the core method for identifying audiences in RTB bidding, many companies have developed workarounds utilizing device ID, geolocation and other forms of consumer identity they can associate with the publishers’ impressions.

Ultimately, Hansen says, the BPA and its members are “hoping for a conversation” about the proper use of the data.

“What we wish to do is take the high road here,” he explains, adding that a broader industry discussion is needed involving the IAB and advertisers, agencies and the third-party technology firms they use on the demand side.