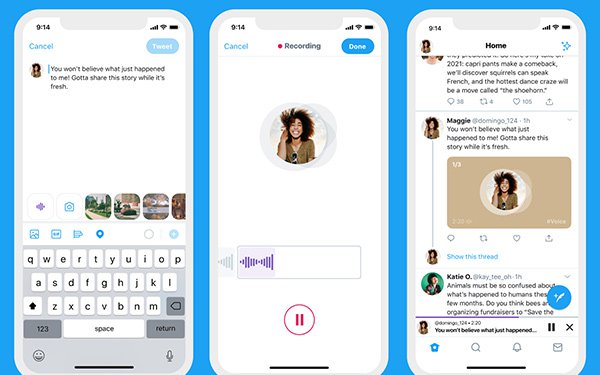 Maya Patterson and Rémy Bourgoin, staff product designer and senior software engineer at Twitter, made the announcement on Wednesday.

Together with other Twitter executives, they decided that users would benefit from another mode of expressing their thoughts and feelings.

“Sometimes 280 characters aren’t enough, and some conversational nuances are lost in translation,” they wrote. “There’s a lot that can be left unsaid or uninterpreted using text.”

In addition, Patterson and Bourgoin said they hope the new feature will inspire storytellers and other creative folks to express themselves on Twitter.

“Whether it’s #storytime about your encounter with wild geese in your neighborhood, a journalist sharing breaking news, or a first-hand account from a protest, we hope voice Tweeting gives you the ability to share your perspectives quickly and easily with your voice,” they said.

The test comes amid a podcasting boom, as well as efforts by podcasting platforms to expand their social-media features.

For example, Spotify recently added a “Group Session” feature, which lets premium users share their live playlists with each other.

In a nod to its original character limit, what Twitter is calling “voice tweets” can include up to 140 seconds of audio. If users have more to say, it will be included in additional audio tweets, which the platform will configure automatically.

Patterson and Bourgoin did not say when Android users will get the ability to test out Twitter’s new audio feature.