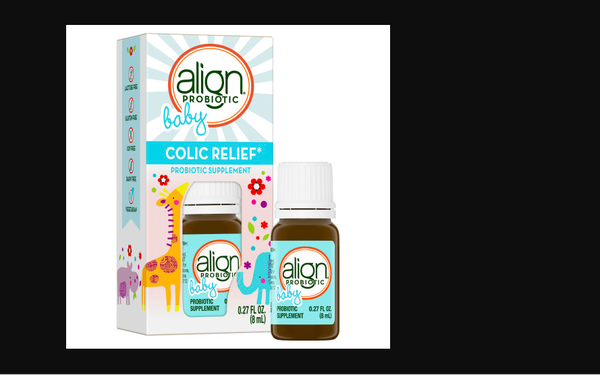 Procter & Gamble, which already makes the over-the-counter Align probiotic for adults, will introduce Align Baby Probiotic, Colic Relief, which it says is “specially formulated to add good bacteria for a healthy tummy and to help soothe fussiness and crying, for a happy baby.”

Like all probiotics, all versions of Align make claims that have not been evaluated by the Food and Drug Administration.  But when Procter & Gamble made it available in 2009, it said Align would defend against all kinds of “digestive upsets,” but namely constipation, urgency, gas and bloating.

Some research says one out of five babies suffer from colic and often, so do their parents, whose nerves and patience can be stretched to the breaking point.

And studies show that babies diagnosed with colic tend to harbor higher levels of bacteria types that can cause inflammation and excess gas, according to a study quoted on the website ParentingScience.com.

A study published last year in the Alimentary Pharmacology and Therapeutics Journal reported researchers were able to reduce the length of crying bouts by over 50% by treating babies with probiotics for colic.

For the new Align baby version, the company partnered with Jamie Otis, described as  “a board-certified RN and mother to a 2-year-old and newborn who swears by the Align Baby Probiotic product.”

Otis may be better known at this point as a former “Bachelor” contestant and the star of the debut season of “Married At First Sight,” though it’s not information P&G freely offered. Her new baby, Hendrix, was born in May.

“As a mom to a new baby and someone constantly in touch with other moms of little ones, a pain point we share is finding the best ways to soothe fussiness in our kiddos,” she said in a prepared statement.  And she said, the baby version of Align is  “that clutch product that will deliver effective, quick relief.”

Ilonka Laviz, P&G brand franchise director for North America Digestive Wellness, said, “The first 1,000 days in a baby’s life are an important window of time to support microbiome development and long-term health. With this in mind, we created Align Baby Probiotic, to give parents access to an option from a brand they already trust for their own gut health.”

New baby users would be joining a crowd. Though dated, a 2012 National Health Interview Study showed that 4 million U.S. adults had used probiotics or prebiotics in the previous month, and use had quadrupled between 2007 and 2012.

P&G seems plugged into the angst of moms, who may take too much blame for occasionally unhappy infants. P&G earlier addressed that emotion in February when its Pampers brand launched its #ShareTheLove campaign  to reassure parents their babies think Mom is pretty terrific.