Shutterfly Takes Kids' 'Thank You' Creations To Next Level 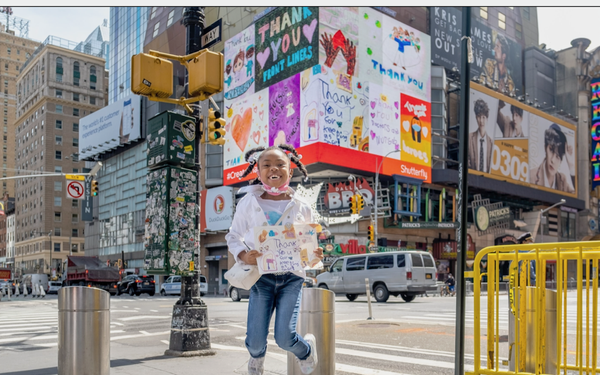 The U.S. may be reopening, but Shutterfly, the personalized products company, wants the gratitude for essential workers to keep on flowing. It’s featuring children’s thank-you drawings in out-of-home installations in a new campaign, kicking off in New York City’s Times Square and Grand Central Station.

Throughout the pandemic, Shutterfly has been encouraging users to make messages of gratitude with its “Create Thanks” campaign. People all over the U.S. have been touched by kids’ homemade “Thank you, essential workers” messages.

Besides taping the drawings up in living room windows, making sidewalk chalk drawings or tacking them up on front porches, many uploaded their handiwork to the company's content hub, says Jim Hilt, president of Shutterfly’s consumer products divisions.

In the early days of the pandemic, the company created displays of the artwork in six senior-care facilities in the New York metro area. But beyond that, there was no unified place to see them.

“It lacked a vehicle. So many people wanted to say thank you to these front-line workers, especially those in healthcare. And we wanted to bring those messages to New York City in an impactful way,” Hilt tells Marketing Daily. “The people who are doing the work we all need are still facing the same risks as they were a few months ago. We think it’s important to find new ways to keep up that message of thanks.”

For the unveiling, the company brought several kids whose artwork is featured into the city, so they could see their creations towering over Times Square (as in image above) or gracing Grand Central Station (below). 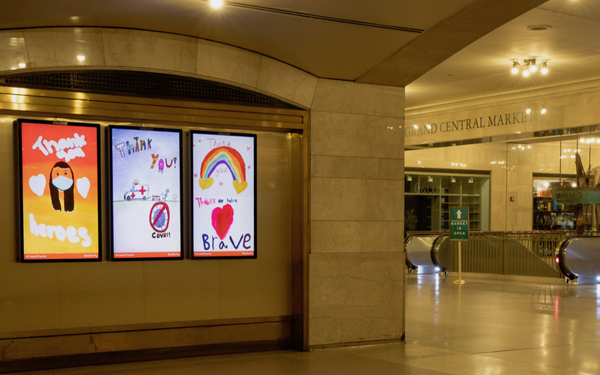 The effort is the latest in its “Shutterfly for Good” campaign, which kicked off last month with a $750,000 donation for COVID-19 support, including partnerships with Baby2Baby and Feeding America.

Hilt says business has been exceptional at Shutterfly, up in the double digits. (Sales at Lifetouch, the company’s school portrait division, have been impacted by school closings.) “In a surprise to no one, personalized puzzles have been very popular, as people look for ways to entertain their kids. And anything cozy and comforting has been selling extremely well, like fleece blankets and pillows.”

Photobooks, a Shutterfly standby, have also been exceptional sellers.

Pre-pandemic, those items might have been turned around in a few days, but as demand surged, that stretched into weeks. “The customer’s patience for these was incredible,” says Hilt. “We’ve seen amazing generosity in our customer base.”

And while Shutterfly, long established as a digital D2C brand, had many advantages as people began sheltering in place, it’s also learned a great deal. “We have come to understand that the value of time to consumers is becoming more critically important. And we feel that’s intensifying. So we are constantly asking ourselves, 'How can we give people back more time?’” notes Hilt.

While the company is already agile, it’s looking to increase the speed at which it makes decisions. “We are leaning into the ways we help families stay connected, and all the social changes driving that. And we’re focusing on our ability to help people share and express that sense of family.”