Why use a dog whistle when you can whistle Dixie out loud for everyone to hear? That seems to be the new strategy of the President’s reelection campaign, which placed ads in social media blatantly displaying images used by the Nazis to identify political prisoners.

In an encouraging sign, Facebook took down the ads, which featured a red inverted triangle, which was originally used by the Nazis in the 1930s “to identify Communists, and was applied as well to Social Democrats, liberals, Freemasons and other members of opposition parties,” The Washington Post reports, adding: “The badge forced on Jewish political prisoners, by contrast, featured a yellow triangle overlaid by a red triangle.”

While a campaign spokesperson said the symbol in the ads was used to represent anti-fascist group Antifa -- a main foil of the President’s recent attacks -- it is not Antifa’s symbol, which depicts two overlapping flags.

“The Nazis used red triangles to identify their political victims in concentration camps. Using it to attack political opponents is highly offensive,” Jonathan Greenblatt, CEO of the Anti-Defamation League, tweeted today, adding: “@POTUS' campaign needs to learn its history, as ignorance is no excuse for using Nazi-related symbols.”

So kudos to Facebook for taking it down, even if they continue to maintain a policy of allowing political ads that are false and borderline in other ways.

Double kudos to Facebook for giving users a new control enabling them to opt out of political ads altogether.

Meanwhile, I get why the President’s campaign is casting Antifa as a villain, given the violent behaviors of some members during protests or counter-protests.

But my real question is when did it become permissible to be pro-Nazi but anti-anti-fascist in America? 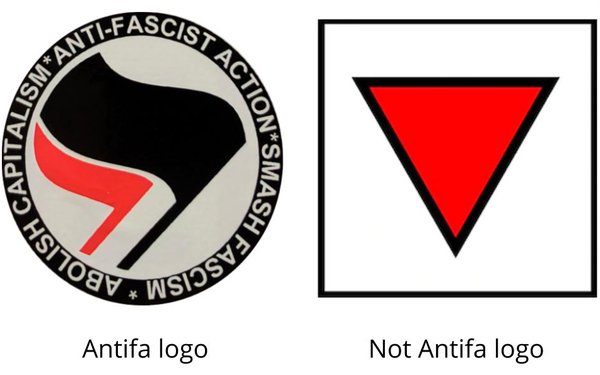