Anheuser-Busch's Babe Canned Wine Is Growing Up Fast, Via Ecommerce 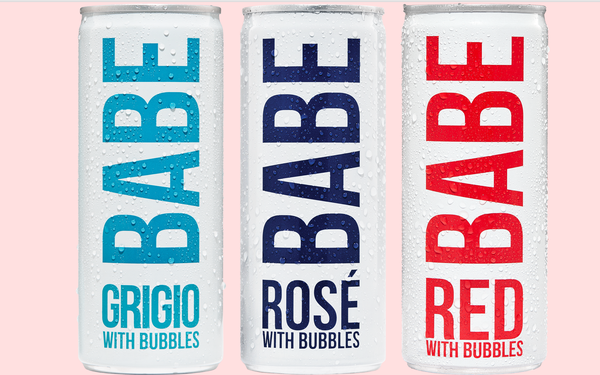 With the rapid rise of hard seltzer and the plethora of craft beers now widely available, there wouldn’t seem to be room in grocery store refrigerators for canned sparkling
wine.

But the category is going gangbusters.

In 2014, the canned wine market was worth $10 million; today it’s worth north of $70 million, according to Nielsen, and things are still looking up. The research company says canned wine will represent 10% of the total wine market by 2025.

Among the major brands on the shelves is Babe, a brand Anheuser-Busch InBev acquired just last year from Instagram influencers  David Oliver Cohen, Tanner Cohen and Josh “The Fat Jew” Ostrovsky (who really goes by that name and has millions of Instagram followers).

Now, Babe is among the top five canned wines on retailers’ shelves, but its success has also come from distribution via ecommerce, a route those founders devised.

According to Chelsea Phillips, the Babe general manager with a background in marketing A-B InBev’s other non-beer assets, Babe used ecommerce then because it didn’t have the clout or wherewithal to get shelf space.

During the pandemic, Babe used ecommerce and social media to thrive while competitors were just learning. Phillips tripled its ecommerce budget.

She also did quirky things like using the U.S. mail. When the pandemic hit, Phillips says, Babe realized,  “Now people at home were really looking forward to the mail. They can’t wait to open it, so we used mail to get to them.”  Along with its sales pitch, it offered a free face mask. That resulted in  a 70% redemption rate, she says.

And when the nation bunkered down, Babe offered free wine and gave away product worth $1 million in 24 hours.

Babe has a strong base of millennial women as customers, but it’s more “coed” than you might think, Philips says, and it has another gang of customers who are in their mid-50s to mid-60s. It's also popular with African Americans.

All told, Phillips says, Babe has sold 7.6 times more product so far this year than it did all of last year, and 49% of its customers are repeat buyers.

Phillips just got notified its Babe Red was awarded the prize for “World’s Best C02 Infused Red Wine” in a competition of sparkling wines. Still, it isn’t a serious wine-drinker’s wine that is going to win lots of awards.  MyRecipes.com taste-tested nine canned rosés and declared it “the worst overall.”

That might be tough, but Phillips acknowledges Babe isn’t a player in what she calls the “quality” wine market.

The wines come with a couple things those hoity-toity brands don’t.

One is its name. “[Founder] Josh has said the one thing with wine is that no one knows what kind they like," says Phillips. "They might be able to name the type of wine they like, but not a brand."

The other factor is canned wine’s portability. “I go to a game now, and in a crowd I can enjoy it without worrying about spilling it,” she says. That isn’t true with a typical glass of wine.

Had there been a Major League baseball season, Babe would be sold at stadiums, she says, and there would be signage around at ballparks. That’s now the plan for the NFL, where Babe is to become the “official wine sponsor” this season. It's also likely to have major presence for Pride Week events coming soon.