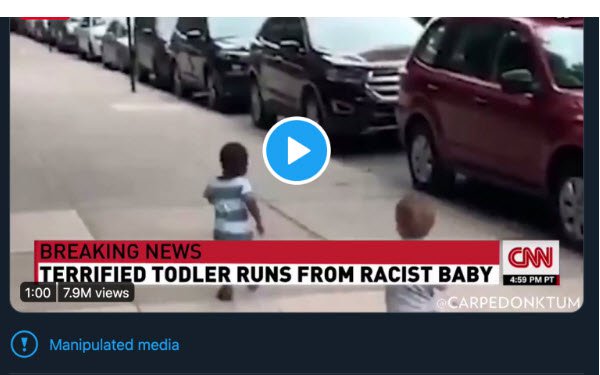 Twitter has flagged another Donald Trump tweet: In this case, for its inclusion of video manipulated to distort its true context and imply that CNN aired it that way.

The video bears a chyron, faked to look like it is from CNN (above), declaring: "Breaking News: Terrified Toddler Runs From Racist Baby.”

The clip shows a white toddler supposedly chasing a black toddler down a sidewalk.

But when viewers click the “manipulated media” warning label now appearing on the clip, they see a fact-checking page that includes a link to CNN’s original share of the video.

The full clip actually shows the two toddlers running to embrace one another, with the headline: “These Two Toddlers Are Showing Us What Real-Life Besties Look Like.”