For The First Time Ever, Google Ad Revenues Are Poised To Decline -- Digital Ad Market Share, Too 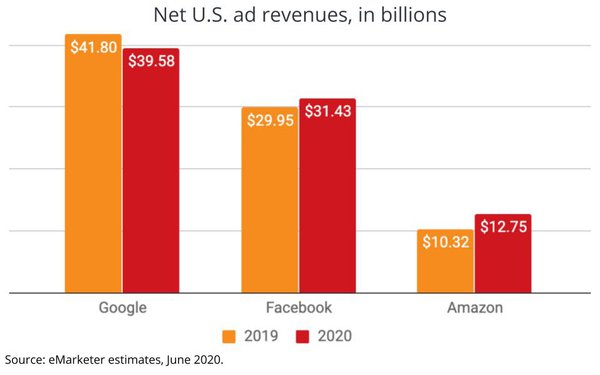 For the first time since it has been tracked, Google's U.S. ad revenues will decline this year, according to revised projections released today by eMarketer.

“Google's net U.S. ad revenues will decline this year primarily because of a sharp pullback in travel advertiser spending, which in the past has been heavily concentrated on Google's search ad products,” explains Nicole Perrin, eMarketer principal analyst at Insider Intelligence. "Travel has been the hardest hit industry during the pandemic, with the most extreme spending declines of any industry."

Interestingly, the other two of digital's Big 3 -- Facebook and Amazon -- will increase their ad revenues, as well as their share of digital ad spending in the U.S., especially Amazon, which has benefited from a surge in ecommerce that was also triggered by the pandemic.

Google's share will decline 0.8 point to 29.4% of digital ad spending.