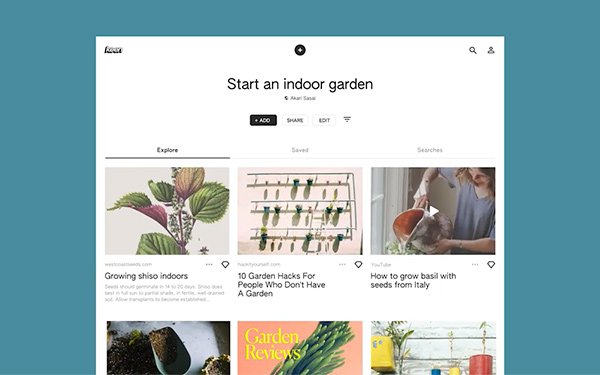 Android co-founder CJ Adams might owe his latest project to one paraphrased line from a Mary Oliver Poem, “this is our one precious life,” a line that became a shorthand clue for his wife and him to spend more time on things they love to do.

That week they began collecting things across the web that brought them “joy” to share them. She sent him links to resources on bird identification, migration patterns and good binoculars. He found other content to share.

Those efforts and the line from the poem led to the project, developed in the incubator Area 120, a team within Google where engineers create experimental apps and services. Along with Google’s People and AI Research team for Android devices, the two teams launched the new project, called Keen.

Although media has portrayed this new project as a Pinterest competitor,  Adams clearly states that the app is a tool to collaborate with others by curating content from across the web. It's about sharing a person's passion with the world, which provides Google with clues about people's interests that prompt searches.

The similarity might be the ability to curate and share things, similar to Pinterest Pins, but Roger Montti, CEO at Martinibuster.com, identified the difference — “Keen represents a new opportunity to grow popularity and traffic [because] the most powerful recommendation a website can receive is a recommendation from one friend to another.”

It’s also different from a Google search. “A search engine is passive,” Montti wrote. “It waits for someone to ask it a question. … Instead of passively suggesting content in response to search queries, Keen actively recommends content that people will enjoy.”

The curation of content also lets Google know what a person’s specific interests are, collecting additional clues as the company drops the support for third-party cookies in Chrome.