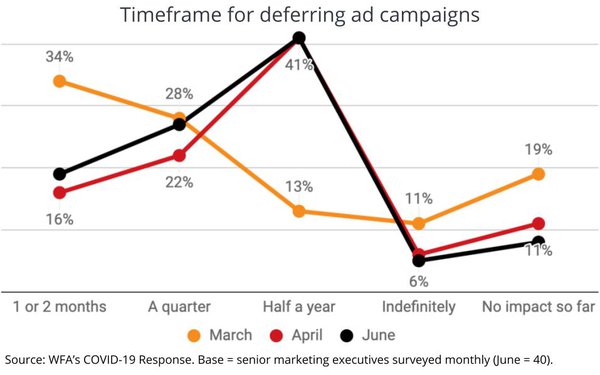 Months into the global pandemic, a majority of senior marketing executives still say they are deferring their ad campaigns by half a year or longer, according to the third in a series of tracking studies conducted by the World Federation of Advertisers.

The most recent survey, based on responses to a survey fielded this month, shows 41% of marketing executives are postponing their campaigns by at least six months, the same percent citing that number when the WFA last surveyed its members in April.

While their conventional campaigns have been deferred, the vast majority of WFA members have already launched "response campaigns" to the COVID-19 pandemic. Seventy-eight percent said they have done so in the June survey, which is up from 68% in April and just 32% in March.

On the bright side, the WFA members say the disruption is also an unplanned opportunity to "rethink their marketing organization." Eighty-four percent said they agreed with that observation, and 67% said their "transformation" already is under way.