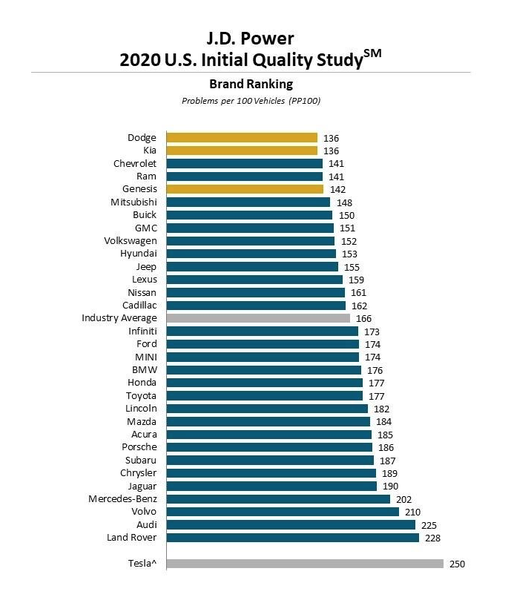 Dodge and Kia have tied for the highest in overall initial quality, according to J.D. Power.

Chevrolet Sonic achieves the best score of any model in this year’s study. Jaguar receives first-ever model-level award with the Jaguar E-Pace.

Tesla receives an initial quality score of 250 PP100. The automaker is not officially ranked among other brands in the study as it doesn’t meet ranking criteria. “Unlike other manufacturers, Tesla doesn’t grant us permission to survey its owners in 15 states where it is required,” said Doug Betts, president of the automotive division at J.D. Power. “However, we were able to collect a large enough sample of surveys from owners in the other 35 states and, from that base, we calculated Tesla’s score.”

Redesigned this year, the study measures components that fail and features that are difficult to use, hard to understand or don’t work the way owners want, including issues related to new technologies.

“The higher problem levels we see in this year’s study don’t mean vehicle quality has worsened; rather, the redesigned study asks additional questions that allow owners to cite more of the problems that they are experiencing,” said Dave Sargent, vice president of automotive quality at J.D. Power, in a release.

Collectively, this is the best-ever performance by the Detroit automakers—when compared with the import brands—in the history of the study.

Most premium brands are below average. Premium brands generally equip their vehicles with more complex technology, which can cause problems for some owners, according to J.D. Power.

The 2020 redesign marks the fifth generation of the study, which is based on a 223 questions organized into nine categories: infotainment; features, controls and displays; exterior; driving assistance (new for 2020); interior; powertrain; seats; driving experience and climate.

This year’s results are based on responses from 87,282 purchasers and lessees of new 2020 model-year vehicles who were surveyed after 90 days of ownership. The study was fielded from February through May 2020.