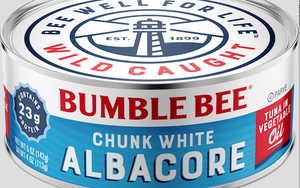 Iconic Bumble Bee mascot Horatio has been canned as the brand adopts a wellness positioning and redesigns its packaging.

It’s not because the 120-year-old bee ever posted anything offensive on social media.

In fact, the bee aspect of the tuna brand lives on, but with a new twist: Bee Well For Life, the slogan that adorns Bumble Bee cans and pouches that began appearing on store shelves in the past few months.

On the new cans, the word “tuna” appears in small letters opposite the protein count. The specific product iteration gets front-and-center attention.

“What we were going for is a more culinary-forward and fish-forward idea in all of our Bumble Bee graphics,” Todd Putman, executive vice president and chief growth officer at Bumble Bee Foods, tells Marketing Daily.

Putman—whose CPG background includes Procter & Gamble, Coca-Cola and Campbell Soup Co.—joined the company in the fall of 2018. A year later, Bumble Bee filed for bankruptcy and was acquired in February of this year by Taiwan-based FCF Co.

“We were in a category that was declining anywhere from 5% to 10% for the last five or ten years," notes Putman. He attributes some of the drop to generational tastes.

“Center-store, shelf-stable products had kind of lost favor as millennials and other younger cohorts went to either fresher or frozen offerings,” he notes.“And the category of shelf-stable seafood did not do a very good job of maintaining relevancy with younger consumers,' or integrating around new products.”

Even though shelf-stable seafood is profitable for retailers and provides high turnover, “There’s a lot of innovation and creative work that needs to be done for making the category easier to shop and more intuitive than it is today.”

Bumble Bee uses influencers, digital and social media, paid search and public relations to generate awareness. That will change in August, when the company—working with its new agency, The Many—will introduce “what we think of as a breakthough campaign that will include television as well as some outdoor.”