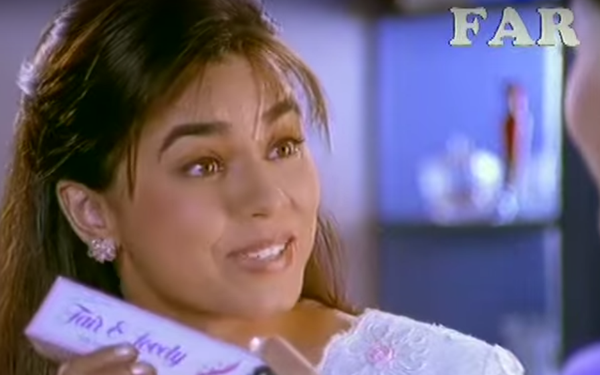 A vintage spot for Fair & Lovely

Acknowledging that the branding suggests “a singular ideal of beauty,” Unilever yesterday said it would rename its Fair & Lovely skin-lightening cream and will remove all references to the words “fair/fairness,” “white/whitening,” “light/lightening” from its products’ packaging and  communications.

“We are fully committed to having a global portfolio of skin care brands that is inclusive and cares for all skin tones, celebrating greater diversity of beauty,” the Anglo-Dutch conglomerate states in a release announcing the changes.

“Unilever’s India unit, in which the company owns a 67% stake, said it had shifted from such marketing in 2019 and would continue to evolve it to feature women of different skin tones,” they add.

“Unilever’s move comes after it was repeatedly called out on social media in recent months for its whitening cream, first launched in 1975. Global campaigns on social media like #unfairandlovely have also been critical of beauty stereotypes since 2016,” they add.

In addition, “two separate petitions urging Unilever to stop the production of its Fair & Lovely range have been signed by more than 18,000 people in recent weeks,” Lora Jones reports  for BBC News.

“This product has built upon, perpetuated and benefited from internalized racism and promotes anti-blackness sentiments,” one petition says.

“A second petition claimed the cream 'tells us that there is something wrong with our color, that we have to be light in order to feel beautiful. In order to feel worthy,’” Jones continues.

“Fair & Lovely’s active ingredient is nicotinamide, a form of vitamin B3, which produces the effect of lightened skin by suppressing skin flushing,” Alexandra Sternlicht reports  for Forbes.

Sternlicht also observes that “Twitter users remained critical after Unilever’s announcement, saying that the product is inherently racist and should be dropped: ‘It's still meant to lighten your skin,’” Toronto-based journalist Natasha Fatah tweets.

Meanwhile, “Johnson & Johnson, the U.S. giant that owns some of the world's top consumer brands, has also discontinued two lines of skincare products that refer to ‘Fairness' on the labels, it confirmed Thursday,” Michelle Toh writes  for CNN Business.

“The company says it will no longer sell its ‘Fine Fairness’ brightening serum, which is sold under the Neutrogena brand in Asia and the Middle East. It will also pull a moisturizer marketed in India by the brand Clean & Clear, which is called a ‘Clear Fairness Cream.’

“Johnson & Johnson emphasized that ‘these products made up a very small part’ of its global portfolio, and added it had already planned to discontinue one of the lines later this year,” Toh adds.

Buzzfeed News’ Megha Rajagopalan actually broke the news on June 13 in the middle of a story looking at the differences between what some companies have been saying about Black Lives Matter and the skin-lightening products that they sell.

“Procter & Gamble, which sells similar products under its Olay brand, declined to comment. L’Oreal, whose Garnier site in India includes a ‘whitening' section for men’s face wash under the PowerWhite brand, did not return requests for comment,” Priya Arora and Sapna Maheshwari write  for The New York Times.

“The focus on skin lightening products has emerged as U.S. brands reckon with their use of racial stereotypes involving Black Americans on popular products,” they add.

“Modern brands have tapped into stereotypes about skin tone with deep roots in Asia and Africa, entwined with hierarchies wrought by centuries of colonialism, according to historians. Conversation about this history have become increasingly mainstream,” Miriam Berger writes  for The Washington Post.

“‘Colorism is a persistent social force in India, and many South Asian countries,’ the model and ‘Top Chef’ host Padma Lakshmi wrote on Instagram. ‘I know it made me feel insecure growing up. We need to dismantle this harmful relic of colonialism through representation for all skin-tones,’” Berger continues.