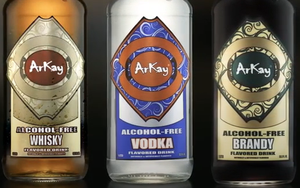 What do perfume and liquor have in common?

Most people would probably say not too much—but not Reynald Vito Grattagliano of Arkay Beverages.

In 2007, while living in Panama, his son returned home one night from a club in a taxi instead of his car because his dad had told him never to drive while under the influence of alcohol.

“The first thing he told me was, ‘why don’t you make an alcohol-free whiskey’? Grattagliano recalls. “I told him I would try.”

In this interview, Grattagliano—who was a perfumer before pioneering zero-proof beverages—talks about recreating the taste and “burn” of alcohol, why Arkay went strictly direct-to-consumer back in 2011, and the trend toward “sober bars.”

CPG FYI:  What’s the relationship between perfume and alcohol?

So I tried to work on a formula with taste and smell of whiskey, but it was missing the kick, or the burn, of alcohol. I came up with the burn by inventing a warm molecule, and created Arkay.

CPG FYI: You seem to have been ahead of the curve as well in selling directly to consumers. Why did you choose that over retail distribution?

CPG FYI: You also dabbled with Amazon early on?

Grattagliano: I was on Amazon in 2011 until 2012, and then I pulled out. I came back about six months ago, and we’re doing fantastic on Amazon.

CPG FYI: In the last few years, you’ve had some company in the zero-proof spirits space. How is that going?

Grattagliano: In 2016, Diageo invested in Seedlip, which was a very good alcohol-free gin, and then in 2019 they started working with a company called Ritual making an alcohol-free whiskey.

At the beginning, people were buying Arkay out of curiosity or necessity. But many people didn’t want to put $50 on a bottle because it might not be so good. Because Diageo copied me, it gave more credibility to my business.

CPG FYI: You’ve got a lot of Muslim fans. Why is that?

We’re doing very well in Pakistan, Saudi Arabia, Kuwait, Bahrain, Malaysia and so on because we give them the possibility to have fun, but without any issue with their faith.

CPG FYI: You’ve spent money on a billboard in Times Square, ads on buses, some television and in-flight magazines. What are you doing now?

Grattagliano: Zero. In 2019, we spent $10 million on advertising and did $36 million in sales. In 2020, we wanted to start advertising again and then boom—the coronavirus came. We didn’t know what was going on, so my wife and I decided to stop.

Can you imagine today if I had signed for a multimillion-dollar campaign in Times Square and there’s nobody there? It would be a disaster.

CPG FYI: Along with so-called sober bars, what other types of distribution does Arkay have?

Grattagliano: This is a sweet move we’re doing. There are a lot of bars starting a new movement called sober bars. Bars without alcohol. All of them are either carrying Seedlip or Ritual or Arkay.

And also, we got a little bit of distribution with Budweiser in Maine. We did very, very well until the coronavirus arrived. We had to stop the distribution because the stores closed. But they are very interested to increase buying from us, because there are requests from stores.