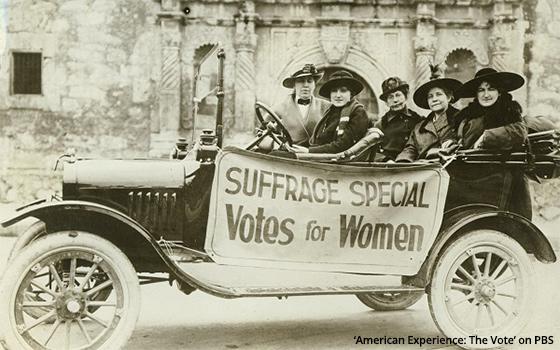 Those who relish the occasional opportunity that TV presents to take a deep dive into the history of various protest movements will relish this new, two-part, four-hour “American Experience” documentary about the fight for women’s suffrage in America.

Subtitled simply “The Vote,” and airing Monday and Tuesday night this week, the arrival of this new documentary is meant to coincide with this summer’s marking of the 100th anniversary of the 19th Amendment.

Passed by both houses of Congress in May and June 1919, and ratified by the requisite three-quarters of the states on August 18, 1920, the amendment established the right of adult women to vote in America.

It was a social change that took 72 years to bring about -- ever since a group of women first proposed it at a first-of-its-kind women’s rights convention held in Seneca Falls, N.Y., in 1848.

As this documentary amply demonstrates, history is complicated. Issues related to the way in which the women’s movement’s revered 19th-century pioneers regarded African-Americans might cause consternation for some present-day viewers.

It is a debate that is raging today: How do we square the racial views of renowned historical figures who many people nevertheless admire for the good they also accomplished in their lives?

Or to put it another way, shall we tear down the statues of Susan B. Anthony and Elizabeth Cady Stanton because of the low opinions they harbored about the relative intelligence of 19th-century African-Americans?

To the credit of this documentary, their attitudes in this area are given a full and candid airing, right alongside their efforts to win the right to vote for American women, demonstrating once again that people are complicated and contradictory.

Let the record show that the documentary does not propose condemning these heroines of the women’s movement, or desecrating their statues.

The documentary’s main thrust is the history of the suffrage battle in the years leading up to the ratification in 1920.

The backstory of the 19th-century women’s movement is summarized quickly, and then the documentary traces in great detail the women’s suffrage movement starting in 1906.

“The Vote” is rich in both scholarship and visual appeal. Let it be noted, and also celebrated, that PBS documentary series such as “American Experience” still adhere to rigid standards in the production of their documentary films.

There are no filmed reenactments of historical events here -- just archival movie footage and photographs displayed with great creativity.

“The Vote” provides another demonstration that history comes more alive when primary sources are applied than when history is re-created inauthentically with actors in period costumes.

And now, this very documentary can stand on its own as a valuable resource for anyone interested in learning about the history of women’s suffrage in America.

“American Experience: The Vote” airs over two nights, Monday and Tuesday (July 6 and 7) at 9 p.m. Eastern on PBS.