Bolstered By Sales Gains, SweeTarts Doubles Down On 'Be Both' 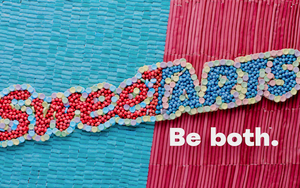 Motivated by gains in awareness and sales from last year’s “Be Both” campaign for SweeTarts, Ferrara Candy is putting a new push behind the creative concept targeting Gen Z consumers.

New “Be Both” television and digital spots show people interacting with candies as a way of highlighting what both have in common: being more than one thing.

“SweeTarts is sweet and tart, it’s long and short, hard and chewy. But it’s also a really great reflection of GenZ,” John Kovacevich, executive creative director at SweeTarts agency Duncan Channon, tells Marketing Daily. “They’re a generation that refuses to be defined by one thing.”

“We had sort of a more animated approach last year, and it did well. But when we dug into it a little bit more, we decided to take a slightly different creative approach this year and focus more on live action and showing the candy off,” says Kovacevich.

In a new 15-second TV spot titled “Library,” a SweeTarts fan is perplexed when a friend sitting at her table offers her a package of “Singulars” candy.

“When I have SweeTarts Rope Bites, they’re sweet and tart. Why wouldn’t I want both?” the fan says as she dumps a pile of her candy onto the table.

Three six-second spots for digital platforms put the candy front and center -- as in this video titled “Book.”

According to Duncan Channon, there was 28% lift in brand consideration among people who were exposed to either TV or digital “Be Both” ads in 2019, as measured by PMI Brand Effect.

The campaign drove an 8.3% lift in dollar sales compared to the food and beverage average of 4.4%, per IRI data from mid-April to June 6 of 2019.

Other campaign activations include a limited release of SweeTarts Golden Ropes, in collaboration with the motion picture “Wonder Woman 1984,” which was scheduled to hit theaters in June. It was postponed until August and then October because of the ongoing pandemic.

The tropical-flavored candy, inspired by Wonder Woman's golden Lasso of Truth, includes art tied to the film on the packaging.

“That was the big cornerstone promotion of the summer,” says Kovacevich. “People are seeing the product in the stores and they know the connection to it. It’s proved to be very popular.”