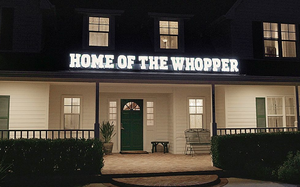 New campaigns from Burger King and Popeyes indicate that some QSRs are returning to more lighthearted—even weird—messaging after months of focusing on pandemic-induced safety and community involvement.

Beyond good humor, what the campaigns have in common is that both feature home delivery during the ongoing resurgence of the coronavirus in many states.

Burger King’s “Homes of The Whopper” sweepstakes essentially seeks to recruit customers to advertise for its more than 7,000 U.S. locations by offering them free signage to do so.

Each time someone makes a delivery order on the Burger King app until July 24, they become eligible to win a giant, illuminated HOME OF THE WHOPPER sign to adorn their residence—plus free delivery all summer.

A campaign video titled “Home Of The Whopper” shows the signs being assembled before being perched on the roof of a suburban residence, a mobile home and other dwellings. It ends with the Burger King logo below the word “delivery.”

Sweepstakes winners will be drawn at random, with the grand prize winner receiving a 15-foot-long steel-and-vinyl sign with LED lights. Smaller, unlit signs will be awarded to 50 other entrants.

On the weird side, the three-minute Popeyes “Pizza Party Crashers” video starts by posing the question “Are people willing to trade their pizza for a Popeyes Family Meal?”

Viewers then see a Popeyes deliveryman driving around looking for pizza-delivery drivers so that he can follow them to their destinations and “crash this pizza party.”

His first attempt is successful, as he convinces a woman to hand over the pizza she just received for a Popeyes Family Meal. He returns to a Popeyes drive-through to pick up a second meal bag before staking out another pizza deliverer and following him to a woman’s home.

“No. Thank you, have nice day,” the woman says as she rejects the pizza-for-Popeyes offer and retreats inside.

The campaigns from Burger King and Popeyes appear on social media. Burger King also ran a print ad in The New York Times.