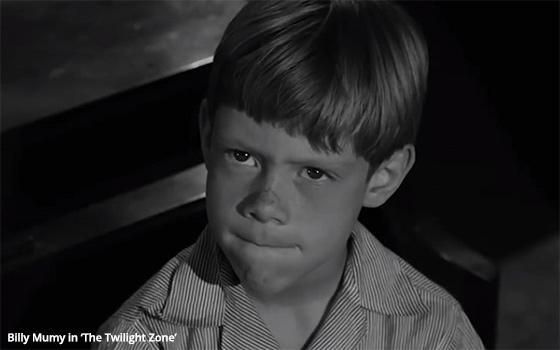 I was stunned on Thursday to learn that the decision by the giant food retailer Trader Joe’s to purge, rename and repackage a slew of its ethnic-food brands was made because a child complained about them.

This evident fear of a child reminded me of a long-ago episode of “The Twilight Zone” from 1961 that was titled “It’s a Good Life.”

In the show, a town of adults was held in a state of abject fear of a six-year-old boy (played by Billy Mumy, pictured above) who had the power to determine whether they lived or died.

Today, it seems as if many adults are frightened, or at least wary, of offending the sensibilities of younger people who air their complaints about the world on social media, and then demand that the world acquiesce or else.

For example, take Trader Joe’s. Forgive me for coming late to this story. I first heard about it some days ago, but decided I could not tolerate delving deeper into why Trader Joe’s had suddenly come to the realization that criticism of its ethnic-brand names was too ferocious to dismiss or ignore.

Today’s constant outflow of stories about moral indignation over food packages, celebrity tweets and old statues tend to leave me pretty indignant myself. So recently I have endeavored to avoid or ignore them.

However, on Thursday, I was unable to resist reading about the Trader Joe’s story in the context of an editorial in The Wall Street Journal.

In this editorial, I learned that Trader Joe’s quickly caved after a 17-year-old high-schooler in northern California launched an online petition earlier this month in which she complained that the Trader Joe’s brands represented “transgressions” against other cultures.

For the record, the brands in question are (or were, since they are now to be expunged) Trader José’s (Mexican food), Trader Ming’s (Chinese), Arabian Joe (Middle Eastern), Trader Giotto (Italian, although the Italian equivalent of “Joe” or “Joseph” is Giuseppe, not Giotto) and Trader Joe San (Japanese).

For those interested in reading this petition in its entirety, it can be found here. Since this TV Blog is an opinion piece, I will now give my own opinion of this petition: It reads like a piece of satire -- like something you might read in The Onion.

Nevertheless, within days, Trader Joe’s swung into action with a bold public promise to heed the advice of this worldly teenager and mend its racist ways. Let the record show that at the writing of this TV Blog on Thursday afternoon, this 2-week-old petition had only 4,283 signatures.

“We demand that Trader Joe’s remove racist branding and packaging from its stores,” reads the first sentence of this 17-year-old’s petition.

In the “Twilight Zone” episode, the little boy -- Anthony Fremont -- became famous for a phrase he repeated in the show.

Pointing angrily at an adult who offended him, the boy would declare: “You’re a bad man! You’re a very bad man!” The offending grown-up then awaited his fate.

This episode of “The Twilight Zone” was based on a 1953 short story by an author named Jerome Bixby, so the idea of children controlling the world while adults cower is at least as old as that.

“Tonight’s story on ‘The Twilight Zone’ is somewhat unique and calls for a different kind of introduction,” says Rod Serling at the beginning of the show.

He then tells the tale of this small Ohio town which is the last surviving such town in the entire world after the world is destroyed, and the monster that resides there: a six-year-old boy.

“This is the monster,” says Serling. “His name is Anthony Fremont. He’s six years old, with a cute little-boy face and blue, guileless eyes. But when those eyes look at you, you’d better start thinking happy thoughts, because the mind behind them is absolutely in charge. This is the Twilight Zone.”