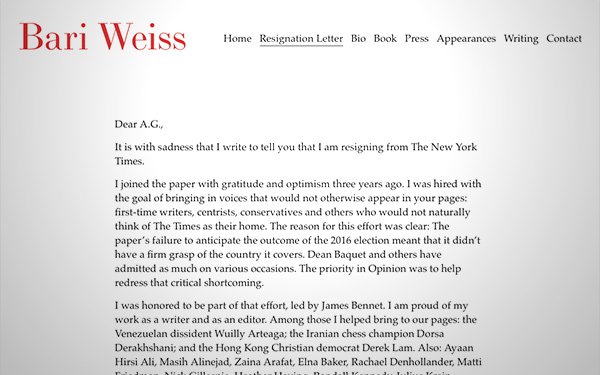 This morning, New York Times op-ed editor and writer Bari Weiss announced in a resignation letter made public that she is leaving the paper. New York columnist Andrew Sullivan also announced that he will depart his post following his last column on Friday.

“Twitter is not on the masthead of The New York Times. But Twitter has become its ultimate editor. As the ethics and mores of that platform have become those of the paper, the paper itself has increasingly become a kind of performance space. Stories are chosen and told in a way to satisfy the narrowest of audiences, rather than to allow a curious public to read about the world and then draw their own conclusions.

"I was always taught that journalists were charged with writing the first rough draft of history. Now, history itself is one more ephemeral thing molded to fit the needs of a predetermined narrative.”

Weiss' letter also cites bullying by coworkers, both on Twitter and company-wide Slack channels, where they posted "ax emojis next to my name," that made her work life untenable.

Sullivan announced his news via Twitter later in the afternoon, writing: “The underlying reasons for the split are pretty self-evident, and I’ll be discussing the broader questions involved in my last column this Friday.”

He added: “I've been preparing for this eventuality, and the column will continue elsewhere. See you on Friday, when I'll detail some exciting news.”

Weiss joined The Times in 2017 as an editor for the opinion section and served as an associate book review editor at The Wall Street Journal prior. Sullivan, who previously worked at The New Republic, Time and The Atlantic, joined New York in 2016.