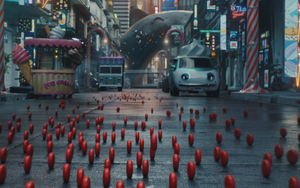 Mini-cheese “heroes” come to the rescue of people tempted by daily snacking options in Babybel’s “Join The Goodness” campaign as part of a global rebranding.

“Based on a true, cheesy story,” the campaign video from the Havas agency is designed to resemble a movie trailer as it depicts a fantasy city filled with bad snack choices.

The 60-second spot opens with actress Grace Courtney—whose credits include the horror/thriller movie “Playhouse”—moving through a world portrayed in real and computer-generated imagery.

People are seen ordering hot dogs and consuming sugary snacks as the voiceover by French singer and voice actress Kaycie Chase says, “In a world where temptation lurked around every corner, we were constantly tempted. All we needed was a little help…help to realize another snack was possible.”

Rolling to the rescue come legions of Babybel cheese “heroes” in their iconic red wax shells, accompanied by animated animals who—acting as a league—take on the junk foods.

“Consumers live in a world where temptation is omnipresent,” Babybel USA brand director Melanie Nemoy tells Marketing Daily. “The campaign was born out of the notion that Babybel can be a partner to help people realize another snack is possible.”

Beginning next month, Babybel will appear in stores with new package graphics that will “highlight both the playful experience of our product and the goodness within.”

The “Join The Goodness” campaign also includes 15- and 30-second spots. Media include 27 cable television networks—including Disney and Food Network—along with Hulu and YouTube.