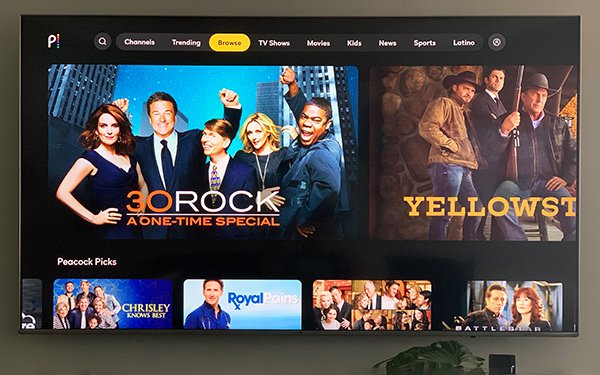 Two days in from its national launch, NBCU’s Peacock, its new streaming premium service, has earned some initially lukewarm reviews among those who downloaded the app via Apple iOS and Google Play.

Apptopia notes out of a possible top score of five, Peacock ratings are 2.6 on Google Play and 3.3 on iOS.  It estimates the app was downloaded 360,000 so far on those services.

One main complaint from consumer reviewers is that you can’t stream Peacock to your smart TVs -- including Samsung TV sets. Other grumbles include app freezes, bugs and latency issues when it comes to content.

Notable issues for many — not being able to access Peacock on Roku and/or Amazon Fire TV devices -- two big app distributors each with 40 million monthly active users. NBCU has yet to strike any deals with either Roku or Amazon Fire TV.

The positives for many users: A big library of free shows -- no subscription fee needed. Additionally, reviewers like the easy-to-access program guide interface.

Another plus point, according to reviewers, just five minutes of advertising time per hour. Traditional TV networks can have up to 20 minutes of non-program time (advertising/promotion) content per hour.

A story on Friday from CNBC quoted Roku executives saying NBC wants to control virtually all advertising on the service -- especially on Peacock’s streaming free tier.

Digital media executives says part of any app carriage deal on Roku and Amazon means publishers giving up around 15% to 20% of their hourly advertising.

All this comes on the back of NBCUniversal big promotional effort on Thursday night to tout Peacock, as well as all NBCU programming in a prime-time show, “30 Rock: One Time Special,” an infomercial of sorts for all things NBCU.

The effort was a replacement of sorts for NBCU 's annual live business-oriented event at Radio City Music Hall in New York City for media buying and advertising executives.