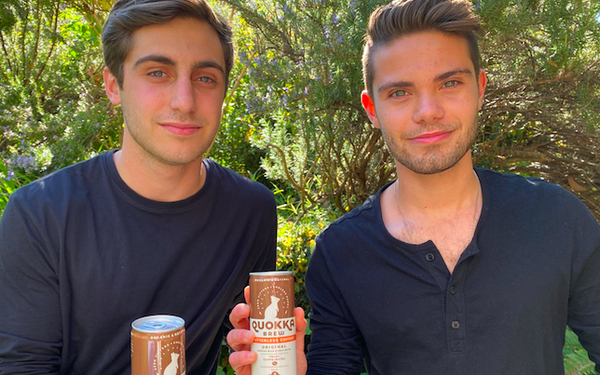 In 2019, UC Berkeley students George Passantino and Ofek Arush began to sell 4-ounce bottles of cold brew coffee with almond milk on campus. By starting a student ambassador program, they were able to expand sampling and sales of their Quokka Brew across six additional California campuses.

When the pandemic began this year and students headed home, Quokka Brew’s fledgling but lucrative market crashed. Passantino and Ofek then pivoted to online sales in preparation for the replacement of their original product with 8.4-ounce cans of cold brew with oat milk.

To help finance that effort, earlier this week they took to the Indiegogo platform with the hopes of raising $15,000—and were 100% funded in four hours. As of this writing, Quokka had garnered just over $35,000 in pre-orders for the new product.

In this interview, the duo talk about the origin of their patent-pending blend of trademarked Jitterless Coffee—formulated with a proprietary blend of organic amino acids and “brain-boosting” nootropics—and their hopes for retail distribution.

The interview has been edited slightly for length and clarity.

CPG FYI: How did you come up with a “jitterless coffee”?

Passantino: In the fall of 2018, Ofek and I were studying for finals, drinking a lot of coffee, and noticing that we were getting super jittery, anxious and, eventually, just totally crashing. We realized there was no coffee that did what we were looking for, that would leave us energized, but not feeling shaky, anxious or stressed.

We finished finals and went home for winter break. The next five months we spent on research, trying out different amino acids, natural extracts, nootropics and talking to different food scientists and chemists.

CPG FYI: So you started out by sampling at UC Berkeley?

Arush: George and I were tabling it at school. A lot of people would say, “We love this company, how do we join?”

That’s when we got the idea of creating an ambassador program. That started going really well—we grew to about 40 students—so we decided to try it at other colleges.

We packed a car to the brim with our glass bottles, taking a table with us and driving to different universities and replicating the process.

CPG FYI: Where did your initial funding come from?

Passantino: We didn’t take on any funding. We paid for this with a combination of money we generated from selling the bottles, as well as some of our college allowance.

CPG FYI: You have a patent pending for Quokka Brew. How did you achieve that with so few resources?

Passantino: The thing about us is, we’re not from [the beverage] industry, so a lot of this was just learning by doing. UC Berkeley has a consultation center that helped us out and pointed us in the right direction. And then we just spoke to lawyers and other people who directed us in filing the patent correctly.

CPG FYI: What was the pivot like to online sales?

Passantino: When we were selling at the campuses, we had our website. However, it was just one of those things that was there. We didn’t put a lot of time and effort into it. And then, virtually overnight, we saw all of our college ambassadors—and largely our target demographic—go back home due to the coronavirus shutdown. So we really needed to figure out how to sell online.

Arush: It was very rough in the beginning. It was me, George and our chief operating officer Kevin Borgh drinking our own product, staying up until 4 a.m. many nights for, like, two weeks straight.

CPG FYI: What are your plans for retail distribution?

Passantino: Retail is very expensive. We’re not experts in this industry, but we’ve been able to talk to people who are. Our whole goal right now is to talk to as many founders and people who have been there and done that to give us some direction.

Our goal is to keep building our college ambassador program and online presence, then go into retail in the next year, year and a half. But we have started discussions with independent natural grocers in the [San Francisco] Bay area.