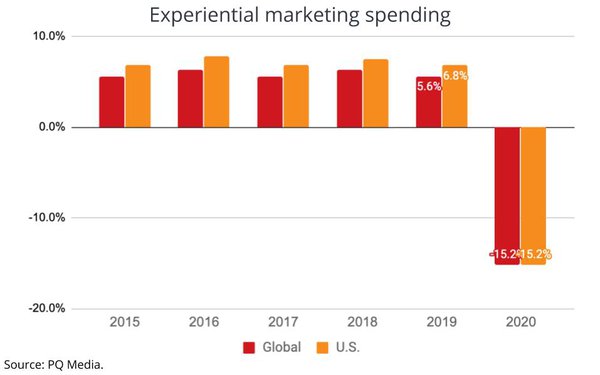 In a world where many forms of human experiences have shifted from live, physical venues to virtual ones or been canceled altogether, the experiential marketing industry has also hit the brakes in 2020, according to findings of the latest in a series of annual tracking studies from PQ Media.

PQ's just-released 2020 "Experiential Marketing Forecast" projects the industry will decline more than 15% this year, following years of sustained mid-single digit expansion. In gross marketing dollar terms, that's an erosion of nearly $13 billion to $71. billion worldwide. Roughly half that spending is in the U.S., according to the PQ report, which calls the effects of the COVID-19 pandemic a "punishing blow to consumer event marketing and sponsorships."

Not surprisingly, the live consumer event marketing sponsorships portion of the category also takes a huge hit, declining nearly 14% in 2020.

Long-term, PQ projects the experiential marketing marketplace will rebound, forecasting a 6.1% expansion in 2021, even though there is no clear indication that the COVID-19 pandemic will actually be brought under control by then.

"Dozens of local and regional fairs, festivals and other grassroots events endured the same fate, such as the Beale Street Music Festival in Memphis, which was cancelled for the first time in its 43-year history," the report notes, likening the pandemic to a "flash flood" that wiped out event sponsorships.

"Iconic annual music, entertainment, and sporting events -- and entire league schedules -- were also canceled, postponed, or rescheduled for next year, including SXSW in Austin, the Cannes Film Festival in France, and the NCAA March Madness basketball tournament. Even political experiential marketing felt the brunt of the pandemic, as local elections, campaign rallies and fundraising events were postponed or, in some cases, moved online with marginal success." 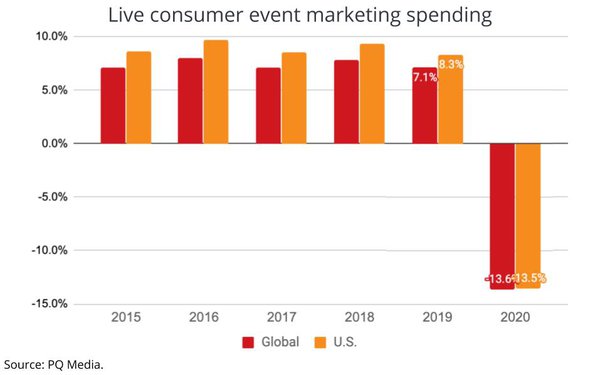