Kind Frozen Takes To The Air (Literally) For Product Launch 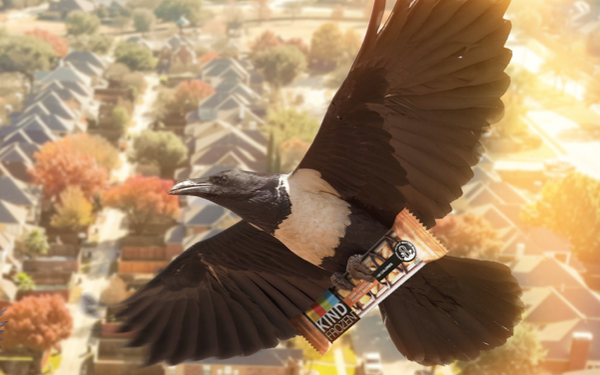 Despite having executed more than 90 product launches, Kind Snacks couldn't have anticipated a more circuitous marketing path to the freezer aisle.

Nor might it have considered sending samples of new, plant-based Kind Frozen bars to people via a hot-air balloon, a trained crow or a drone. But that’s what will happen at the end of a contest that began yesterday.

Initial plans called for the launch of Kind Frozen to have been promoted by a pop-up experience in Manhattan, along with a paid presence on Instagram and Facebook.

But because of COVID-19 and the recent marketer backlash against Facebook, those plans got sidetracked.

Before the pandemic, Kind Frozen had a retail test run at Walmart while considering live marketing options.

“We probably had 50 different scenarios laid out at one point. There was a lot of love for the pop-up concept and we tried our best to make it work,” Jonathan Yohannan, senior vice president of integrated communications at Kind, tells Marketing Daily. “Around April, we still had hope we could pull it off at the end of the summer.”

However, considering that consumers have been making fewer trips to stores, “we wanted to bring Kind Frozen right to peoples’ front doors,” Yohannan adds.

So Kind has partnered with Antoni Porowski—the food and wine expert on the Netflix series “Queer Eye”—in a week-long contest on the company’s website.

Three winners will receive Kind Frozen bars delivered either by a hot-air balloon—via parachute—a trained crow, or an unmanned drone. In addition, the winners will each participate in a 15-minute video call with Porowski.

In a final pivot, the company says it recently canceled plans to spend $2 million on Facebook and Instagram, the majority of which would have supported the launch of Kind Frozen. In doing so, Kind joins hundreds of marketers that have paused their spending in a backlash against hate speech.

In a YouTube video promoting Kind Frozen, a voiceover explains how the main ingredient is nuts — before stating, “Brain freeze? More like mind blown.”

The company also will be running paid product images on Pinterest that connect to a landing site where consumers are directed to retailers carrying Kind Frozen.

According to GfK FutureBuy2020 consumer research released today, 18% of all adults used a social media “buy” button, and 14% clicked on “shoppable” articles or posts from January through March.