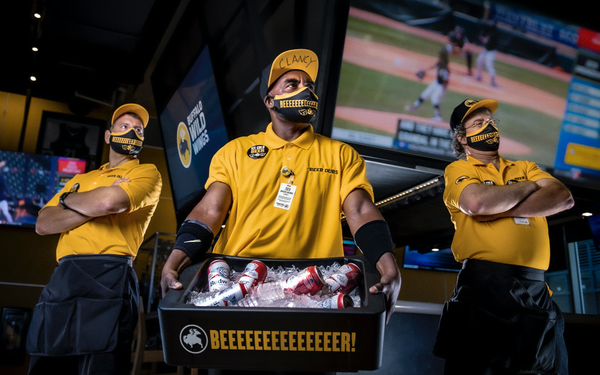 Buffalo Wild Wings aims to bring the in-stadium experience to its locations for fans  who would rather be back in the stands cheering for their teams.

To celebrate the return of sports, the restaurant will debut a 60-second spot from The Martin Agency on ESPN during the Washington/New York game that features beloved beer vendor Clarence Haskett, aka "Fancy Clancy,” a fixture at Baltimore Orioles games for 45 years. The emotion-laden spot shows empty stadiums and laments all the things sports fans will miss by not attending in person. The happy ending shows how the restaurant aims to compensate with in-store activations.

B-Dubs will recognize the return of baseball at its sports bar just steps away from the stadium in Washington --  where the game will be played without fans -- by recreating the sights, sounds and atmosphere of a ballpark.

Fans will be able to eat wings out of the small plastic baseball helmets that have become synonymous with ballparks.

Without fans in stadiums, beer vendors are out of work, so Buffalo Wild Wings hired some of the country's most beloved hawkers to sling cold ones.

On Thursday night, Haskett, along with two other legendary purveyors of beer — Perry Hahn aka "RoboVendor" and Todd Georgelas — will be serving them up at a BWW in Washington.

Like Haskett, Georgelas is a seasoned vet in his own right, having kept Washington fans hydrated for over 10 years. Hahn, a mechanical engineer turned beer vendor, is best known for his unique contraption for speedily opening and pouring beers.

To keep the sounds of the game alive, B-Dubs also commissioned National's organist, Matthew Van Hoose. He'll be bringing his talents and the real-deal organ to BWW on Opening Day.

Subsequent events this season at BWW sports bars around the country will feature other famous beer vendors, including Les Flake, aka "The Beer Guy" (Cleveland), and Rocco Caputo (Chicago).