As Action Gets Under Way Brands Unveil Campaigns With Local Teams 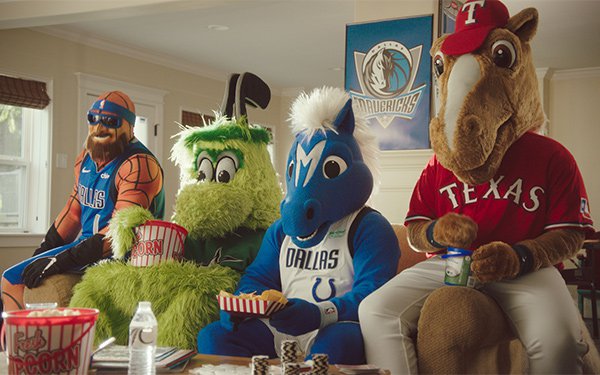 Company's are aligning with professional teams to celebrate the return of athletic competition and to keep their brands top of mind among sports fans.

The humorous creative, developed with The Richards Group, follows the professional mascots of these teams Captain, Victor E Green, Mavs Man and Champ and the journey they must undertake in order to lose their COVID-19 bad habits and return to tip-top shape.

Spots show them working out, improving their appearances, and practicing their shooting skills with garbage cans.

The spots will be running in select markets during MLB, NBA and NHL games on ABC, ESPN and Fox Sports Southwest.

The campaign will weave its content as part of special segments via channel programming, commercials, and Tik-Tok videos. YES’ content will support its team, the New York Yankees, while SNY centers around the New York Mets. Entertainer (and Horizon joint venture partner) Pitbull will have his song "I Believe That We Will Win" prominently featured in social media messaging.

Samuel Adams is celebrating the return of baseball and its role as the Official Beer of the Boston Red Sox with a new campaign, “Your Cousin From Boston.”

The creative, developed with Goodby Silverstein & Partners, pairs the “Cousin” with Red Sox legend Nomar Garciaparra to play off Bostonians pronunciation of the player’s first name as well as “no more.” During the season additional spots will showcase “Nomah spitting” and “Nomah hi-fives.”

The spot will run during the first inning of NESN’s (New England Sports Network) Opening Day broadcast on Friday July 24 during the matchup between the Red Sox and Baltimore Orioles at Fenway.

Additional “Cousin” messaging will run across TV, radio and digital.