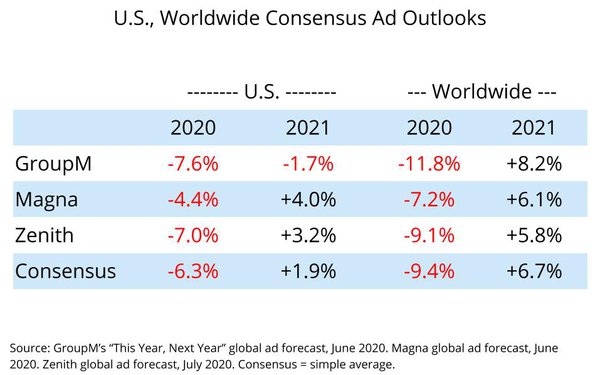 The U.S. and world ad economies will contract 6.3% and 9.4%, respectively, according to a consensus of the Big 3 agency holding company forecasters that have revised their outlooks in the aftermath of the COVID-19 pandemic, as well as the U.S. and global economic recessions.

The consensus, which could well change as other key industry forecasters weigh in, or as the Big 3 fine-tune their estimates further, is a simple average of revised outlooks by WPP's GroupM and IPG Mediabrands' Magna in June, and Publicis Media's Zenith on Monday.

What it shows is that the U.S. will prove much more resilient than the global ad economy to the effects of multiple crises reshaping advertising, media and consumer marketing.

In fact, the most recent data reflecting actual U.S. ad spending from the major agency holding companies, the U.S. Ad Tracker index, shows that the rate of erosion has begun to moderate in June (-17%) vs. much steeper cuts in April (-35%) and May (-31%), suggesting industry predictions that the U.S. ad recession would "bottom out" this summer and rebound in the fall may prove to be the case.

The index, a collaboration of Standard Media Index and MediaPost, also shows the rate of erosion has been much more significant for smaller ad categories, while the top 10 are beginning to normalize.