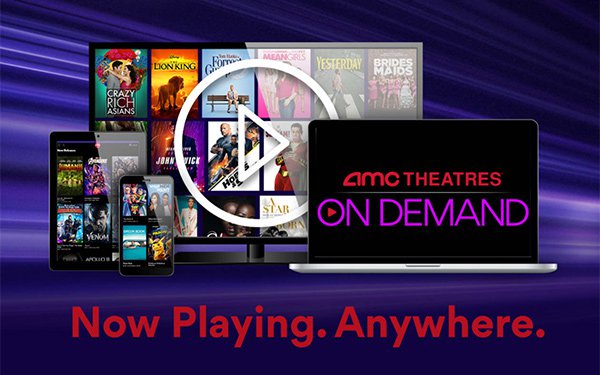 The agreement means no pushback about Universal’s PVOD releases within the first three weekends of a movie's theatrical release.

This is a big change from the hostilities kicked up in the spring over the “Trolls World Tour” video release between the two companies. (It remains the bestselling title on Fandango.)

It’s also an economic reality. AMC moved its cinema re-openings to late August, but states will determine whether that schedule is viable. Most U.S. cinemas are closed due to the COVID-19 pandemic, and it’s unclear when a national opening will occur.

AMC’s CEO Adam Aron stated the company “enthusiastically embraces this new industry model both because we are participating in the entirety of the economics of the new structure and because premium video on demand creates the added potential for increased movie studio profitability.” AMC will also get a slice of future digital rentals, effectively sharing in the streaming revenue, notes Variety.

Universal houses its films on premium on-demand platforms, for about $20 a showing. That fee won’t lower until three months after a film has its in-theater debut.

Movies on the Universal schedule include “Minions: The Rise of Gru,” “355” and “Halloween Kills.”

Donna Langley, chairman of Universal Filmed Entertainment Group, stated: “The partnership we’ve forged with AMC is driven by our collective desire to ensure a thriving future for the film distribution ecosystem and to meet consumer demand with flexibility and optionality.”

AMC stock was up a big 17% in after-hours trading on Tuesday. It had been down over 40% year-to-date, due to pandemic disruption, which closed down virtually all movies theaters since March.

The deal settles a dispute which erupted in April between Universal and AMC.

Back then, due to the pandemic, Universal decided to release “Trolls World Tour” -- a movie intended for in-theater release -- on at-home premium video platforms as a digital movie rental for $19.99. After seeing positive results, Jeff Shell, CEO of NBCUniversal, said he expected streaming to become a major growing factor in releasing “movies on both formats.”

The intent was to release movies in theaters and on streaming nearly or at the same time. That forced an angry response from AMC, followed by other major theater chains.

Aron sent a letter to NBCUniversal calling Shell’s remarks “unacceptable” -- AMC Theaters would no longer “play any Universal movies in any of our theaters in the United States, Europe or the Middle East.”

Now, the two entities are discussing distribution agreements for countries in Europe and the Middle East served by AMC.