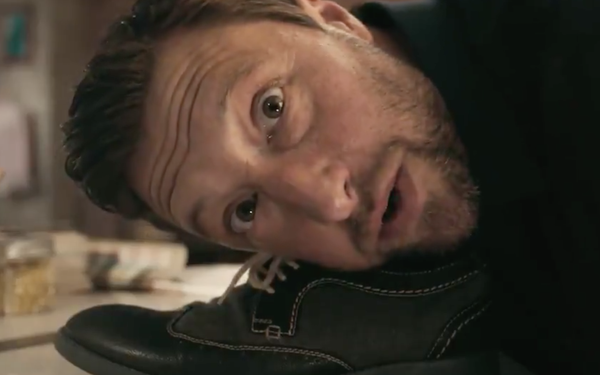 Untuckit's Chris Riccobono: "You can use a shoe as a pillow."

Untuckit gets that, to many people, the problem it solves isn’t exactly a life-or-death matter. So in its new campaign, the D2C apparel company lightens up, with founder Chris Riccobono answering tweets from social-media wise guys.

The brand’s straightforward premise has always attracted skeptics, says Jennifer Olsen, chief marketing officer. “Rather than running away from that, there is some interesting tension. We decided to have fun with it.”

For years, the company has probably been best known for TV ads that feature Riccobono purposefully striding through New York. He earnestly explains how he spent years developing a shirt that looks good untucked, with such pride that one might think he had found the lost city of Atlantis.

“We call it the 'Chris walking’ ad,” says Olsen. “It’s so hard-working and effective, and it tells the founding story of the brand. But you do achieve wear-out.”

And with this campaign, called “Untucked Tweets,” the idea is to make sure that people “understand that even though we are weirdly serious about getting shirts to fit, we do have a sense of humor.”

IPG’s Elephant created the campaign, which includes five different executions. In one spot, a tweeter points out that any shirt can be worn untucked. “You could use a leaf blower as a hairdryer,” agrees Riccobono. “You can use a shoe as a pillow. But wouldn’t you rather have something specifically designed for what you need it for?”

In another, he frets because every man on earth doesn’t yet have an Untuckit shirt. “It keeps me up at night.”

“He can come across as very intense about a problem that seems funny to many people,” Olsen tells D2C FYI. “We wanted to show his warmth and humor, and still give people a sense of why our shirts fit so well.”

The effort also includes radio and social media response, with the brand responding to every tweet about its ads in the same tongue-in-cheek tone. TV spots are set to air on national cable channels including ESPN, Discovery, A&E, TBS, USA and Bravo.

The goal of the campaign is to drive shirt sales among a new audience while retaining the brand’s existing loyal base.

Olsen declined to say whether the privately held company’s sales are up or down, acknowledging that the pandemic-related closure of its 85-plus retail stores depressed results. “But thanks to our D2C heritage and our already-strong e-commerce muscles, our business is trucking along. And we’re killing it with our polos, as well as our “Zoom” shirts.”

She says Untuckit is continuing to eye geographic expansion beyond its existing stores in Canada and the U.K., including Europe. The company now offers 13 product categories for men and women and will push into outerwear this fall.