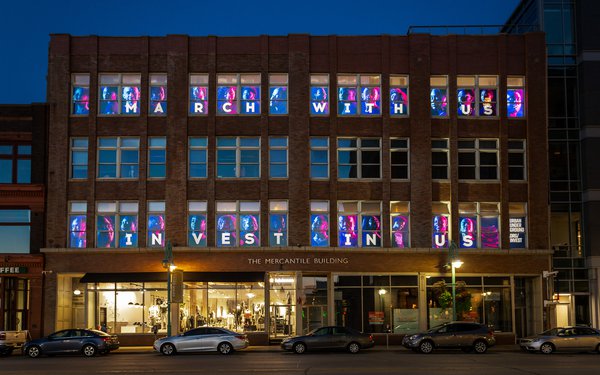 Hanson Dodge (HD) is donating its Milwaukee-based office windows as part of an experiential project co-created and produced by the youth-led social justice group Urban Underground in collaboration with the agency.

The artwork carries the inspirational message “March with us. Invest in us,” conceived by teenage members of the local nonprofit which collaborated with the HD team on strategy, concept development and production of the campaign.  The two sides also developed the accompanying microsite.

The project debuted Friday, Aug. 12, a few days prior to the Democratic National Convention. A very slimmed-down version is set to start today--and will be visible on the office windows of Hanson Dodge.

“You can see them from the freeway and being located in Milwaukee’s popular Third Ward. We felt we had an ideal place to make a statement,” says Chris Buhrman, executive creative director, HD.

This project came together thanks to Greater Together, a nonprofit organization that promotes racial and economic equality in the Greater Milwaukee area. HD serves as one of its founding community partners and Greater Together leaders felt this partnership would produce a “timely and socially meaningful message,” says Buhrman.

“The joy we got from working with these incredible young people and leading them through our creative process to develop a message that was theirs was extraordinary.”

Agency staffers were patient teachers, adds Sharlen Moore, co-founder and director, Urban Underground. HD team members provided a framework to help lead the young people through the creative process, she explains, but the students identified the prime prospect, outlined the desired action, brainstormed the message, shadowed and assisted the art director and photographer, and helped with production. “As one might expect, there were some starts and stops at the outset of the project, as students were learning about the planning, development and creative development process.”

Adds Buhrman: “We share a common vision for the world.  A door has opened and new relationships are ready to be forged.”