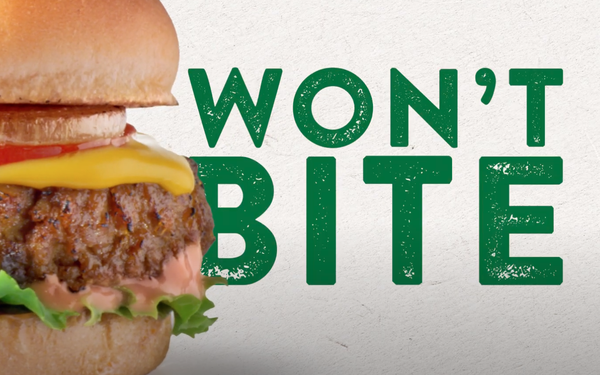 While MorningStar Farms has attracted plenty of vegan and vegetarian consumers over the past few decades, its fledgling Incogmeato brand faces the same hurdle as other plant-based meat substitutes: taste.

Hence Incogmeato’s new “Afraid You Might Like It?” campaign, which is “designed to challenge that undecided flexitarian to give us a try,” Morningstar Farms general manager of plant-based protein Sara Young tells Marketing Daily.

New six and 30-second spots from Weber Shandwick get right to the point with a voiceover that declares “We promise. Incogmeato’s plant-based burger won’t bite. But you should.”

“If you think about it, 60% of Americans want reduce the meat in their diet or want to try plant-based proteins. But in reality, the household penetration of plant-based proteins lags significantly,” says Young. “Why? It’s because [people are] still afraid it won’t taste so good.”

The “Afraid You Might Like It?” campaign is running on social and online video platforms, streaming television that includes Hulu, plus TV networks BET, HGTV, E!, Bravo, TBS, TNT and Discovery.

“We’re going broad with the big idea of goading consumers to dive in and try,” adds Young.

While MorningStar Farms is “beloved by vegetarians and vegan consumers,” those groups have committed to a lifestyle change.

“This is really different than a flexitarian consumer, who wants to maybe substitute out part of their portfolio for real meat,” Young adds.

Asked whether retail pricing remains a hurdle to trial of plant-based meat substitutes, Young says, “Not nearly as much as taste.”