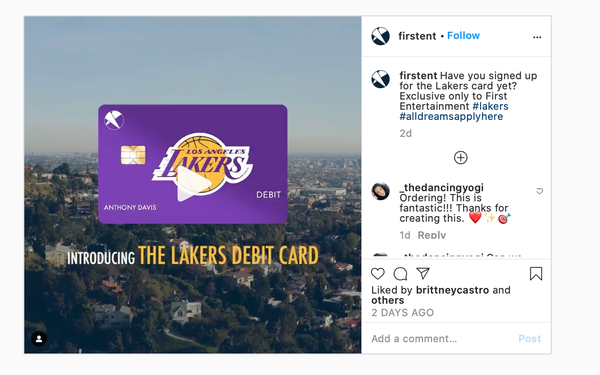 First Entertainment Credit Union and the NBA’s Los Angeles Lakers are launching a debit card in conjunction with a multiyear brand sponsorship between the two entities.

Separately, First Entertainment and Lakers power forward Anthony Davis entered into an individual arrangement in March, when Davis stepped into the role of the institution’s first official brand ambassador with an ad campaign and TV spot titled “All Dreams Apply Here.”

“Further establishing the relationship between the Lakers organization and First Entertainment is an endeavor we don’t take lightly, especially in a time when we’re missing events that have long played a critical part in creating a sense of community and home for Lakers fans,”  Redmond says in a release.

First Entertainment and the Lakers also plan to launch initiatives aimed at educating students and young adults on the importance of financial literacy and responsibility.