Facebook Steps Up Action Against QAnon, Other Dangerous Fringe Groups 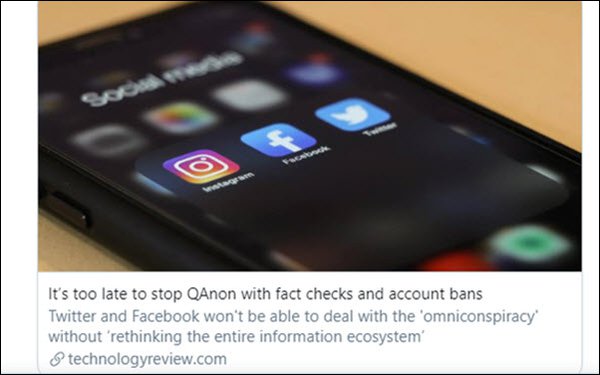 Facebook Inc. is banning some, but not all, activity related to the pro-Trump QAnon conspiracy cult, U.S. militias and other groups that have shown themselves to be "significant risks to public safety," the social platform announced Wednesday, in its blog.

The company also addressed militia organizations and "those encouraging riots, including some who may identify as Antifa," initially removing more than 980 groups, 520 pages and 160 ads from Facebook, and restricting more than 1,400 hashtags on Instagram, relating to such groups.

Facebook said it moved to expand its Dangerous Individuals and Organizations policy "to address organizations and movements that have demonstrated significant risks to public safety but do not meet the rigorous criteria to be designated as a dangerous organization and banned from having any presence on our platform."

"While we will allow people to post content that supports these movements and groups, so long as they do not otherwise violate our content policies, we will restrict their ability to organize on our platform. Under this policy expansion, we will impose restrictions to limit the spread of content from Facebook Pages, Groups and Instagram accounts. We will also remove Pages, Groups and Instagram accounts where we identify discussions of potential violence, including when they use veiled language and symbols particular to the movement to do so."

Facebook said that, going forward, it will downrank QAnon, militia and anarchist protest groups on users' News Feeds and in Facebook and Instagram's search engines. It will also cease featuring these groups and accounts in the "recommendations" sidebar on similar pages, and ban fundraising based on hashtags related to the movements on both Facebook and Instagram.

In late July, Twitter banned 7,000 QAnon accounts and limited 150,000 others as part of a broader crackdown on groups that violate its policies.

Some critics say that such efforts, while better than Facebook continuing to stick to a hands-off policy toward political expression, are too little too late, particularly with the Presidential election only about two months away. (See Twitter post above about a July 26 MIT Technology Review article, "It's Too Late to Stop QAnon with Fact Checks and Account Bans."

"This doesn't mean we've captured all of the ones we want to restrict yet," a Facebook spokesperson told NBC News. "We 100 percent know that they're going to change their terminology. We don't think we're flipping a switch and this won't be a discussion in a week."

Including the hard-to-pinpoint, far-left Antifa movement, as well as far-right groups, in the bans is clearly an effort to demonstrate political balance as Facebook continues its recent step-up in attempting to limit the spread of false and dangerous content.

But the move, though particularly important in the context of the election, is bound to inflame more controversy.

Yesterday, while answering press questions, President Trump appeared to embrace QAnon, which believes that the world is being run by a satanic cult of pedophiles and cannibals led by Democrats, and that Trump is the savior sent to stop this.

"I don't know much about the movement, but I hear they like me very much," and are "people who love our country," Trump said.

Commenting on their demented conspiracy theory, he said: "Is that supposed to be a bad thing or a good thing? I mean, if I can help save the world from problems, I'm willing to do it."

QAnon has been "linked to several violent, criminal incidents, including a train hijacking, kidnappings, a police chase and a murder," noted NBC News.