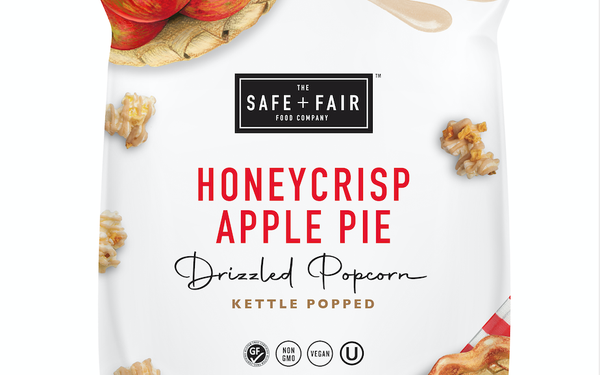 When Skeeter Snacks launched in 2013 to serve people with food allergies, it had just four SKUs. Having rebranded as The Safe+Fair Food Co. in 2017, the company has since expanded to 10 times that number.

Along the way, its consumer base has broadened beyond those who suffer from food sensitivities to anyone who can relate to ingredient transparency and what the company believes is fair pricing.

Safe+Fair’s website offers snacks and baking mixes that are devoid of the most common food allergens—peanuts, tree nuts, milk, egg, wheat, soy, fish, shellfish and sesame—and cater to gluten-free, vegan and kosher diets. Three percent of Safe+Fair profits are donated to the Sean N. Parker for Allergy and Asthma Research at Stanford University.

In this interview, CEO Will Holsworth—who has a background in beverages at PepsiAmericas and MuscleMilk—talks about the company’s category expansion plans and an imminent packaging redesign.

CPG FYI: Food allergies don’t seem to get a lot of media attention. Have they become less of an issue?

Holsworth: It’s a bit surprising there’s not more coverage. There’s about 32 million people in the U.S. who have food allergies, and that number is growing at about 20% a year. It’s an unbelievably difficult affliction if you have it. And it’s binary, so you either have it or you don’t. There’s really not stages of it.

CPG FYI: Back in 2016 when you joined Skeeter, what was your impression of allergy-free foods?

Holsworth: When I started looking at this space, what I saw was three things: They’re expensive, they look weird and taste lousy. Most of the time, it’s a combination of all three.

When I talked to the two founders [of Skeeter] what I said was, let’s make food that’s safe for the millions of people who desperately need it and fairly priced for them and for everybody else.

CPG FYI: How would you describe the target audience for your products?

Holsworth: Our target audience is far beyond just food-allergic people. I would say about 80% of our consumers don’t identify as food-allergic. They are young families who want great food for their kids and for themselves. We’ve done a good job of connecting with a fairly loyal group of consumers. Our ecommerce business is up about 2,000% year over year and our overall business is up over 200%.

CPG FYI: What types of advertising media have driven your growth?

Holsworth: We have 82,000 followers on Instagram. That’s our primary vehicle of communication. We launched a TikTok channel and have a Facebook page, but we don’t spend as much time on them.

We also have 90 brand ambassadors—women on Instagram who are in tune to food and taste and family. We don’t spend anything on a macro-marketing sense.

CPG FYI: What are your near-term plans for new categories and retail distribution?

Holsworth: We now make granola, drizzled popcorn, mixes, cookies, popcorn quinoa chips and pea protein chips and will be in three more categories by the end of the first quarter of next year. We’ve been in six regions of Costco and all 225 Super Targets, 1,200 Krogers and 2,700 Walmarts. We will be in a national C-store chain very shortly.

CPG FYI: What’s behind the upcoming visual changes to your packaging?

Holsworth: We needed a packaging alchemy that allows us to be in several categories—which is difficult. There’s a reason there’s not a Crest toothpaste detergent. It’s hard to get consumers to trust a brand across a myriad of categories, but we feel like we have a good chance to do that.

For a food idea to be actually be a great idea, it has to be something that can be democratized. That means pricing has to be correct, it needs to be understandable and it needs to taste really good. That’s kind of the path we’ve gone down.