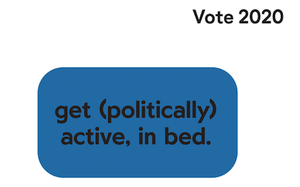 Lunya, maker of fancy PJs, has just kicked off a campaign to get people voting -- without even getting out of bed. Its new “Vote in Bed” campaign promotes absentee voting from the comfiest spot in the house.

“We weren’t looking to make a political statement when we came up with the idea a few months ago,” says Ashely Merrill, Lunya’s founder and chief executive officer. “We thought of this as a truly bipartisan effort.”

But the recent controversy swirling around the U.S Post Office and the safety of voting by mail or with an absentee ballot hasn’t changed the brand’s plans -- or Merrill’s desire to do something about America’s “abysmal” voting rates.

“Among our core market, it’s about 50% [who actually vote,]” she tells D2C FYI. “If we have this opportunity to get people excited about voting, considering how they are underdelivering, we should take it. And because COVID-19 might give people one more reason not to show up, we wanted to make our customers feel more confident and comfortable about voting.”

The PJ pitch is an easy fit. Lunya, founded in 2014, has always promoted “staying in as the new going out.”

Merrill says the company decided to lean into the voting message following a bipartisan event it did last year.

The new campaign is straightforward. Shoppers enter their mobile number to register, and the brand then walks them through the steps for getting an absentee ballot. It’s getting the word out using TikTok and Instagram and will text people reminders of the ballot cutoff dates.

Lunya isn’t the only brand with a get-out-the-vote effort. Tapestry’s Coach is partnering with LeBron James’ More Than A Vote organization. And almost 400 companies, including Best Buy, Dick’s Sporting Goods, Gap, Glossier, PayPal, Patagonia, Target and Walmart have joined Time To Vote. This organization pledges to make sure workers can make it to the polls.

And Levi Strauss has just released a powerful PSA aimed at young voters.

“Even though we know people may be more reticent about voting this year, we want to have this conversation,” Merrill says. “Voting this way doesn’t diminish democracy. It expands it. And we really want people to use their right to vote.&rdquo