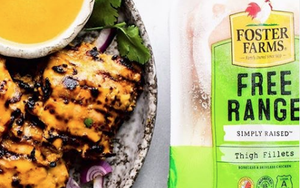 When it comes to using influencers, 2020 has been the year of the pivot for many brands.

Three months ago, a key performance indicator in the influencer space—driving sales—had been supplanted by the desire to project the right brand message and not appear to be insensitive, according to a survey of 59 marketers and agency professionals by influencer agency Linqia.

Some of the change was driven by the need for quick content at a time when advertising campaign production was largely on hold. With consumers buying whatever they could find on store shelves, sales took a back seat to consumer education and utility.

Up until the onset of COVID-19, California-based poultry marketer Foster Farms had planned a major marketing push touting the benefits of its air-chilled chicken.

The company had made significant operational investments to be able to process chickens with cool air as opposed to water once feathers have been removed. Less water absorption means better flavor and texture, according to senior marketing manager Rachel Ferrer.

But with more people cooking at home, Foster Farms decided instead to use influencers for “recipe inspiration.” Eight influencers were chosen by Foster Farms and Linqia to create chicken-based recipes that required just a few basic pantry items.

“People didn’t want to leave their houses, and stores were starting to run out of key ingredients. So we wanted to make sure the content we created fit the context of what everyone was going through,” Ferrer tells Marketing Daily.

The result was more than 10,000 “engagements,” counting views, comments, likes and shares. Click-throughs from influencer posts to a dedicated page on the Foster Farms website exposed visitors to additional recipes and downloadable coupons for its products.

The company has since begun a second phase of the campaign using more than twice as many influencers—plus the added boost of paid advertising on social platforms to expose more people to influencer posts and coupons.

“Almost every program we run has a media component,” says Keith Bendes, head of brand partnerships at Linqia. “Because it’s not just about can I reach the influencers’ audience—it’s, can I bring their content to a much bigger audience?”

With grocery store out-of-stocks less common, some brands have been pivoting back to more of a pre-pandemic approach to influencers.

“So we’re seeing a lot more of the ecommerce and sales push because stock isn’t as much of a problem,” says Bendes.

In particular, the technique of “carting” is taking off.

“So if you click on an influencer’s post, it takes you to Walmart.com with the product already in the basket. That was growing last year when we launched it, but right now, since everyone’s back in stock, it’s exploding for us," says Bendes.