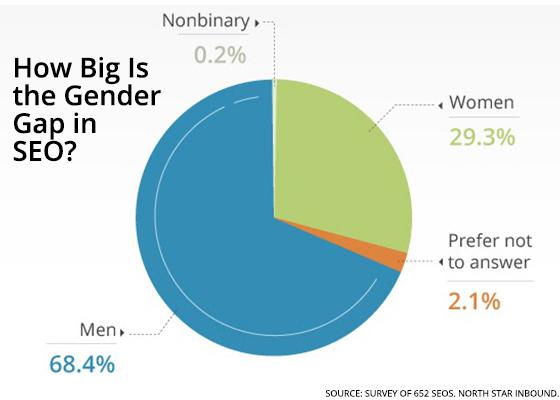 Female SEO professionals only represented about 30% of the industry in 2015 and that percentage hasn’t got much better since.

A study released Monday reached out to SEOs in 51 countries, mining data from the State of SEO 2020 survey.

How big is the gender gap between men and woman?

Nicole DeLeon, founder and lead strategist at North Star Inbound, a link-building and content marketing agency, set out to find answers. She analyzed the data and found that today women represent only 29.3% versus men at 68.4%. Then there's the one person who identified themselves as non-binary and 14 preferred not to specify. Data was collected on a SurveyMonkey form.

When it comes to gender diversity in SEO, the U.S., Asia, and the U.K. all trail behind Europe, Scandinavia, and the Middle East.

Of those participating in the survey in the United States, 70.4% identified themselves as men and 20.6% identified as women.

The gender gap is least significant in Africa, although the sample size was very small. In Canada, 52.6% identified themselves as men and 47.4% identified as women.

Interestingly, 17.7% identified themselves as female freelancers. Females are almost twice as likely to be contractors or freelancers compared with 10.6% of men.

There are other noteworthy differences when it comes to specialties for men and women. Most SEOs consider themselves generalists. Among those who profess a specialty, women are 17.6% more likely to be content experts, compared with males at 7.7%.

On the other hand, the males who identify themselves as SEOs are 21.5% more likely to be technical compared with females at 12.6%. Several females participating the study said they think early gender stereotyping played a role, from the toys little boys and girls are given to what each gender is encouraged to pursue as a career.