One Year After 'Chicken Wars,' Popeyes Can't Wait To End 2020 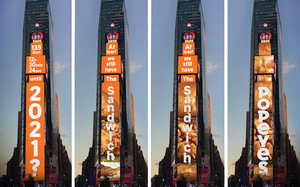 As it celebrates the first anniversary of the so-called chicken wars its new sandwich helped to ignite, Popeyes can’t wait for an “out of control” 2020 to end.

It’s sharing this message via a vertical out-of-home display in Manhattan’s Times Square that mimics the traditional New Year’s Eve Ball Drop—only four months earlier than normal, and minus the dropping ball.

A lack of normal in this year of COVID-19 and all of its economic and personal impact is at the heart of the campaign concept, according to Bruno Cardinali, Popeyes North America CMO.

Beginning Aug. 19, the OOH placement noted the time remaining until 2021—with a question mark placed after 2021.

The image changes to “At least we still have the sandwich,” then ends with the Popeyes logo. The countdown will end on Aug. 31.

“We wanted to do something that would both celebrate the sandwich universally and also be relevant to what’s happening in everyone’s lives and society,” Cardinali tells Marketing Daily. “With the crazy year we’re living through and all the things happening in society, we felt it was a good way to celebrate and bring fun and positivity to everyone’s lives.”

A year ago this month, Popeyes debuted a chicken sandwich that turned out to be its biggest product launch in 30 years. It sold out in weeks, leading to a cacophony of dialogue on social media and competitive banter with the likes of Wendy’s and other QSRs.

Just as Popeyes could not have predicted the impact of its chicken sandwich, it would have been more hard-pressed to imagine what the world would look like one year later.

“We can all agree that 2020 is out of control, but at least we do have the sandwich,” says Cardinali. “It’s a nice way to comfort people. We’re not trying to say the sandwich will save the world.

Agencies involved in the campaign are Miami-based Gut and Alison Brod Marketing + Communications.

In the second quarter ended June 30, the chicken sandwich was credited with helping drive a nearly 29% increase in same-store sales versus the prior-year period.

In related news, Del Taco says it recently became the first Mexican QSR to add fried chicken to its menu.

Yesterday, KFC awarded itself for “the most inappropriate slogan for 2020” as it announced it would pause its 64-year-old “finger lickin' good” slogan in markets outside of the United States—where it was shelved in March.

Marketing Daily reached out to KFC to explain the five-month geographical gap in the slogan pause. "We have taken into account specific conditions in each market and made decisions accordingly. The same goes for the decision to pause the use of It’s Finger Lickin’ Good," said a KFC representative. "We know it won’t be forever, but it’s the right thing to do right now."