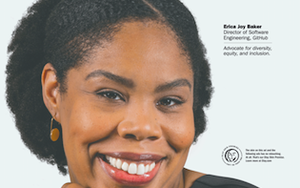 Procter & Gamble’s Olay, which made a bold (and comical) case for women in space on the last Super Bowl, is back in the lab again. This time, it’s boldly advocating for women in science and technology.

The clever new print campaign, partially written in computer code, is designed to bring awareness to the vast gender disparity in those fields. “Only 24% of jobs in the STEM field are held by women,” says Eric Gruen, vice president of North America Olay at P&G. “We wanted to use this campaign to draw attention to that.”

Timed to break on Women’s Equality Day, ads are running in the New York Times, Allure and Harper’s Bazaar. The ads star women working in STEM, including Reshma Saujani, founder and  CEO of Girls Who Code,  Alyssa Carson, the youngest astronaut-in-training, and Erica Joy Baker, director of software engineering, GitHub (photo above).

Gruen tells Marketing Daily the brand’s commitment is to close the gender gap in the next ten years, starting with a $1 million pledge. That includes a $520,000 donation to the United Negro College Fund to support women of color.

He says the effort is a perfect fit for Olay’s ongoing “Face anything” positioning. “We’re always encouraging women to be their authentic selves. And to take it a step further, science is at the core of everything we do.”

Response to that ad, which included a $1 donation for every tweet, “unlocked a moment for us,” says Gruen. Besides “crushing” its donation goals, “it gives us a real focus and rallying cry. And we can help give little girls the role models they need to break into these fields.”

The Olay audience, typically women in their 30s and 40s, responds to the brand’s focus on gender equality. “It’s an important discussion, and we want to be authentic and real when we talk to people about the STEM issue," Gruen adds.

Women’s Equality Day, first celebrated in 1972, commemorates the passage of the 19th Amendment, which granted women the right to vote.