Busch Introduces 'Dog Brew' For Your Good Buddy (Must Pooch Be 3 Years Old To Drink It?) 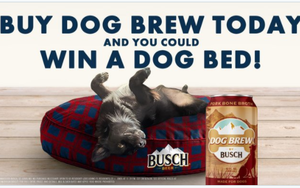 During the last of the dog days of August, Busch Beer introduced Dog Brew by Busch, a beer-less, hop-less, alcohol-free product that would seem to be an impulse buy for Busch drinkers who have a dog as their best friend.

Don’t they deserve a happy hour, too?

Busch stresses Dog Brew is not beer, though it comes in a 12-ounce aluminum can and features product photos that look just like the ones you’d see for a beer for humans.

Dog Brew is sold in four-packs for $9.99 -- more expensive than what you’d pay for a six-pack of Busch beer.

But you know: This is for a good dog.

"After a long day there's nothing quite like having a Busch with a friend, and with so many new pet owners across America this year, we wanted to create a brew to give our fans a chance to share a Busch brew with their 'best friend,'"  said Daniel Blake, Anheuser-Busch's vice president of value brands, said in a release.

A dollar from each case of Dog Brew sold will go to the Best Friends Animal Society.

Dog Brew’s all-natural ingredients are bone-in pork butt, whole corn, celery, basil, mint, turmeric, ginger and water. It’s not meant as a substitute for a real meal, and it’s not meant for humans to drink, though a question-and-answer feature Busch provided says you could, if you want to be especially sociable.

“But this bone broth is made for a dog’s refined palate,” the beer maker says. “You may find it pretty bland & yes, we’ve tried it a few times. Part of the job.”

You can crack your dog a cold one, but Busch notes dogs often don’t like cold items. Room temperature is good.

Busch did not respond to questions about the response to the introduction of Dog Brew,or how long it will be around. It’s only available online -- and, as it turns out, not there either. It’s already sold out.

On the day it was introduced, Busch promised a free dog bed to the first 100 people to order Dog Brew for their little pal.

“Ope! We already sold through our first batch of Dog Brew by Busch,” a message on the website says. “But don’t worry, we’re in the process of brewing more ‘Nectar of the Dogs’!” (You can still order a variety of dog accessories emblazoned with the Busch logo, from collars to dog tags to placemats, or put your name on the waiting list. Marketing Daily is now number 3,721 on that list.)

ResearchAndMarkets.com, which follows marketing trends for several industries, said that in 2019 the “pet treats” market reached $6.7 billion in sales and is projected to grow at a 2.8% CAGR through 2023, actually better than the pet food industry in general. It pointed to one trend that Dog Brew seems to be plugging into: the “humanization” of pet food.