AT&T Says Tech Platforms Should Be Required To Disclose Algorithms 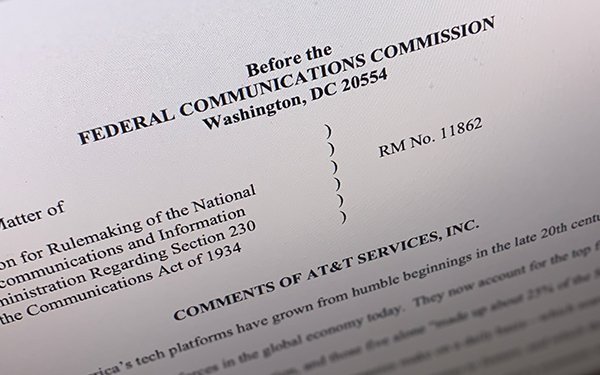 Earlier this week, telecom giant AT&T said it planned to advocate for changes to a federal law that protects companies like Google, Facebook and Twitter from liability for users' posts.

That law currently immunizes websites from civil suits based on material posted by users.

The FCC recently called for comments on the White House's proposal to link companies' protections under Section 230 to their content curation policies.

AT&T has now submitted its official comments, and the company is advocating for new “transparency” rules far broader than simply requiring companies to explain how they treat speech by consumers.

“Leading tech platforms should now be required to make disclosures about how they collect and use data, how they rank search results, how they interconnect and interoperate with others, and more generally how their algorithms preference some content, products and services over others,” AT&T writes. “Such disclosures would help consumers and other companies make better educated choices among online services and help policymakers determine whether more substantive oversight is needed.”

The company says web platforms “routinely amplify some content over other content and shape how it appears, often for financially driven reasons that have nothing to do with the original content-filtering goal of Section 230.”

AT&T adds: “There is also no clear reason why such platforms should play by radically different liability rules than traditional purveyors of third-party content, such as book publishers, newspapers, or radio or television businesses.”

Although the FCC is entertaining public comments on the White House's proposal, the Communications Decency Act doesn't authorize the agency to craft regulations.

In addition, numerous outside legal experts -- including the Association of National Advertisers' legal counsel -- have said that any attempt by the FCC to regulate content moderation policies may violate the First Amendment.