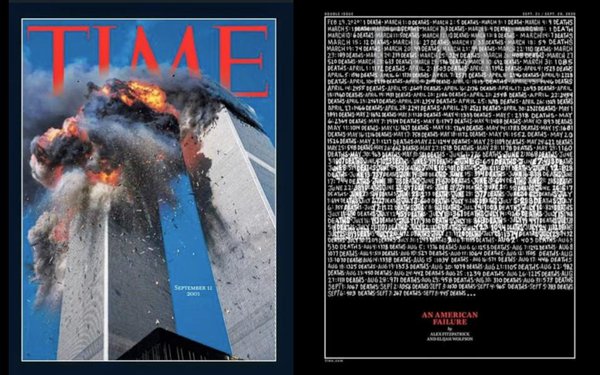 For only the second time in its publishing history, Time magazine has used a black border on its cover for this week's edition featuring a typographic treatment commemorating the nearly 200,000 Americans who have died from the COVID-19 pandemic, so far. Symbolically, the only other time was 19 years ago when Time published its Sept. 11, 2001 issue showing the Twin Towers before they fell.

This week's cover story, "An American Failure," utilizes data from the Johns Hopkins Coronavirus Resource Center, featuring handwritten death counts on every one of the 193 days between the first confirmed U.S. COVID-19 death on Feb. 29 and Sept. 8.

It's rare for Time to deviate from its trademark red cover border. Other than these two black ones, the magazine featured a green border on its April 28, 2008 "Earth Day" issue and silver borders for its Sept, 19, 2011 "10th Anniversary of the September 11 attacks," its Dec. 31, 2012 Barack Obama "Person of the Year," and its Nov. 28/Dec 5 2016 "Most Influential Photos of All Time" issues.
It's June 15, 2020 issue focusing on the protests surrounding George Floyd's death was the first time its red border contained the names of people in it.