In Season Of Silliness, TV Sends In The Clowns 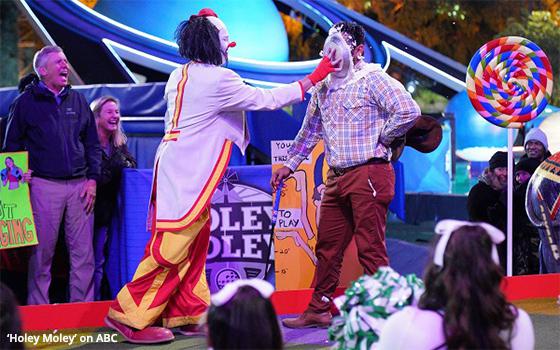 When a TV network resorts to clowns throwing pies, then you know you are in a season of supreme silliness.

The pie-throwing clown pictured above was seen in an episode of “Holey Moley,” a summer series that recently ended its second season on ABC.

“Holey Moley” was basically a miniature golf show, but it was mini-golf on steroids.

Still, it is difficult to understand what a clown armed with a pie had to do with mini-golf. I guess you had to be there, or watch the episode -- which the TV Blog did not.

With its elaborate and decidedly exaggerated and cacophonous approach to airing a miniature-golf competition, “Holey Moley” is just one of a growing number of shows that threaten to turn TV into a three-ring circus (if it hasn’t gotten there already).

Another example is “Dodgeball: Thunderdome,” which turned up in the unlikeliest of places this summer -- Discovery Channel, a network once known for nature documentaries and shows about men who build custom cars and motorcycles.

Now, Discovery has taken up extreme dodgeball on this show in which contestants make their way through a fanciful obstacle course while someone pitches large rubber balls at them.

From miniature golf on steroids to dodgeball on steroids. What’s next? “Kickball Death Battle”?

With its formidable physical challenges, “Dodgeball: Thunderdome” seems inspired by “Wipeout” -- the obstacle-course competition show that aired on ABC from 2008 to 2014.

With that in mind, the news arrived in my email inbox just last week that “Wipeout” is being relaunched for TBS, featuring John Cena as a color commentator.

The news release from TBS emphasized that this “reimagining” of “Wipeout” would be comedic in nature. The release did not say when this show will premiere, but I sincerely hope TBS gives us fair warning.

“Cena and [his co-host, comedian Nicole] Byer will command the hysteria of the fan-favorite series by serving up commentary tailored to the all-around hilarity and thrill of the heart-pumping competition,” said this evidently over-excited news release.

Wait a minute. Wasn’t the original “Wipeout” funny too? Or were we supposed to have taken that show seriously?

Other shows combining with the aforementioned to make up the silliest TV season in memory include “The Masked Singer” on Fox and “Hot Ones: The Game Show” on TruTV.

While searching for an appropriate photo this week for this TV Blog, I found ample selections on the Fox press site from “The Masked Singer,” including one that had the show’s unidentified performers costumed as giant frogs. This photo narrowly lost out to the “Holey Moley” clown photo.

Meanwhile, perhaps the most notable feature about “Hot Ones” is that it is still on TV. This is the game show in which contestants compete by eating the hottest, spiciest substances on Earth and then throwing up. I forget -- do they win by becoming the first to throw up, or the last?

When “Hot Ones” premiered last February, the TV Blog boldly declared that “this show emerges as the first and possibly best candidate to be named Worst TV Show of the Year next December.”

Though there has been plenty of competition since then, “Hot Ones” is still in the running. And isn’t that silly?