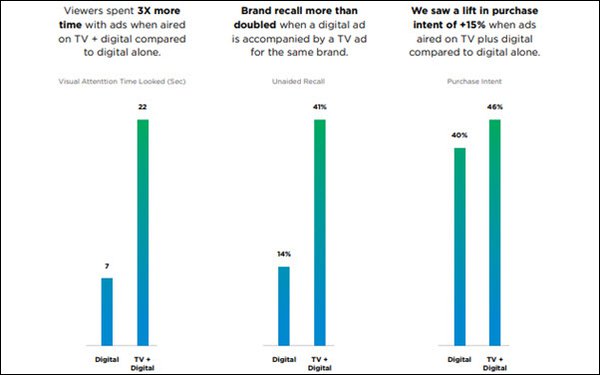 For the study, conducted last September, Effectv and MediaScience assembled a panel of 147 U.S. adults, with their gender ratio reflecting the U.S. population. Participants were all subscribers to TV through cable, satellite or telco, and users of Facebook, YouTube or both.

Participants were shown ads on YouTube only, Facebook only, YouTube and TV, and Facebook and TV. The ads shown were for a mix of known and unknown (fictitious) brands in the automotive, retail and home improvement categories. The digital ads were viewed on mobile. The television experience was designed to simulate linear TV viewing, with ads shown within top-rated cable programming.

When exposed to ads on both TV and digital, versus digital only, viewers spent three times more time with ads, and their brand recall more than doubled. TV-plus-digital drove also drove a 15% lift in purchase intent, according to the study report.

In addition, TV produced a “halo effect,” causing digital ads and their brands to be perceived as more appealing than when they were viewed without accompanying TV ads.

When a digital ad was preceded by a TV ad, perceptions of brand attitude saw a 12% lift. Digital ads were also perceived to be less intrusive, annoying and boring after TV exposure.

While TV was shown to improve consumer response to all brands, the lifts in key metrics were more pronounced for  unknown brands than known or established ones.

Participants said that seeing a brand on TV, even if unknown, “legitimized” the company for them, whereas they expressed skepticism about unknown brands they saw only on digital channels. 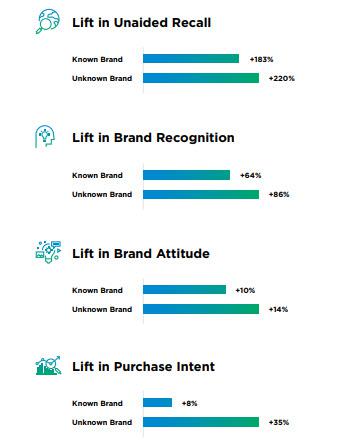 The significant improvement in ad effectiveness and brand performance seen when TV and digital were paired is in part a factor of lower attention to ads in digital environments, according to the researchers.

In the study, 94% of viewers watched the TV ads, compared to 78% in the digital environment. TV ads were watched 2.7 times more than digital ads.

“As consumers’ attention is divided between various screens and experiences, advertisers have more options for where to allocate budget,” John Brauer, executive director of data, insights and innovation, Effectv, tells Digital News Daily. “Many advertisers have shifted more attention to targeted digital video campaigns that focus on short-term sales activation outcomes. Our hypothesis was that this strategy alone is not effective without the contribution of traditional TV advertising designed to build brand strength across the whole category.”

The results show that consumers’ trust in TV as an information source makes it “an essential piece of the puzzle, building brand trust, dramatically improving results, complementing digital channels, and making advertising dollars work harder,” he sums up.

More on methodology: The study was designed to determine statistically significant differences in exposure to a range of brands on digital only and digital with a linear TV exposure.

All participants saw TV, YouTube and Facebook, with the order of Facebook and YouTube rotating. Test ads rotated across the three platforms, so that some brands were seen once on a single platform, and others were seen twice/on two platforms.

Viewers were always exposed to all eight brands on digital (four in YouTube and four in Facebook). However, four of the eight brands were also shown on TV. This allowed researchers to isolate the impact of the brand equity TV spot in combination with the digital spot, versus the digital spot alone. In addition, digital effects were separated out for a short-form video (YouTube) environment versus a social media (Facebook) environment.