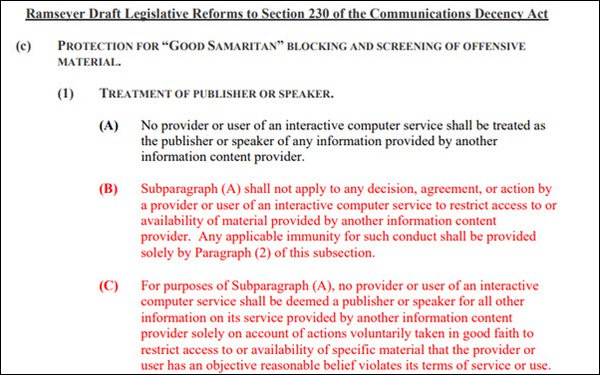 The Department of Justice Wednesday proposed legislation that could make it easier for people to sue web companies for taking down content.

The proposal would amend Section 230 of the Communications Decency Act, which currently protects web publishers from lawsuits over users' speech. Among other provisions, that law currently shields websites from lawsuits for removing or restricting access to users' posts that are objectionable.

The Justice Department's proposed change would limit the circumstances under which Section 230 protects web publishers for content removals.

Under the proposal, web publishers would no longer automatically be protected for removing "objectionable" content. Instead, they would be shielded for taking down material that's “obscene, lewd, lascivious, filthy, excessively violent, promoting terrorism or violent extremism, harassing, promoting self-harm, or unlawful.”

But removal of other content -- including material that's racist, sexist or otherwise considered “hate speech” -- would only be protected by Section 230 if web companies spell out their content moderation policies in advance, and have a “good faith” belief that removed content violates those policies.

“A platform that chooses not to host certain types of content would not be required to do so, but it must act in good faith and abide by its own terms of service and public representations,” Attorney General William Barr explains in a letter to lawmakers about the proposed amendments.

The Justice Department's proposal is one of numerous proposed revisions to Section 230 that have been floated in recent months.

Barr's proposal doesn't seem likely to pass before the next election.

The FCC is currently considering the White House's petition, but numerous legal experts say the agency lacks the authority to issue rules regarding Section 230.