In Midst Of Riots, Portland Lures 'Top Chef' To Film There 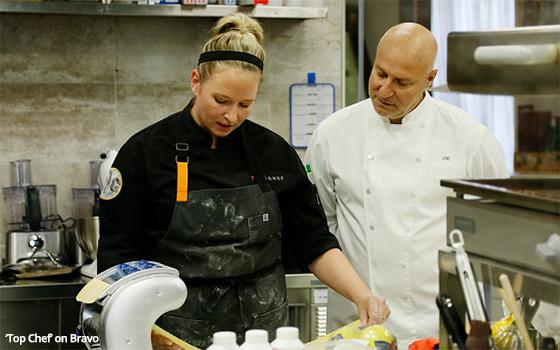 The long-running culinary competition show is heading to the city sometimes known as Stumptown (which is also the name of an ABC series based there) to film its 18th season slated to premiere next year, according to an announcement made jointly on Monday by Bravo, producer Magical Elves and Portland tourism authorities.

It would appear to be an inauspicious time to produce a TV show on-location in Portland that, at least in part, will serve as a program-length promotion for the city’s restaurant and dining scene.

At the moment, it is difficult to envision a restaurant scene in Portland (or anywhere else) thriving just now.

Not only are many would-be restaurant patrons staying home due to COVID-19 risks, but in Portland in particular, the streets of the city’s vibrant downtown have been beset with protests since the death in May of George Floyd at the hands of police in Minneapolis.

At times, the protests in Portland have devolved into riots -- classified as such by city officials because of elevated levels of violence directed at police and property.

“Top Chef” is stepping into this firestorm with the apparent cooperation and enthusiastic endorsement of Portland’s travel and tourism authorities.

“Considering all our community is facing this year, ‘Top Chef’s’ selection of Portland as its filming location means more than if we had been selected any other year because it recognizes that, in spite of everything, our city remains a world-class culinary destination,” said Jeff Miller, president and CEO of Travel Portland in one of the prepared statements.

“We are beyond thrilled that season 18 of ‘Top Chef’ will feature Oregon. Our state is known not only for its scenic wonders, but also for its world-renowned culinary bounty,” said Todd Davidson, CEO of Travel Oregon, in the other prepared statement.

“Oregon’s unique food and drink industry is a significant driver of visitation,” he said. “In fact, studies show that 61% of travelers to the state say culinary-related excursions were the impetus for their trip. ‘Top Chef’ will place an important spotlight on Oregon’s products, places and people, ultimately inspiring visitation and generating economic impact at local and state levels.”

While this might seem like an odd time to put on a TV show promoting travel and dining in PDX (another nickname for Portland), these tourism promoters deserve credit for persevering in the face of the incredible challenges their city and state are facing just now.

It is worth noting too that “Top Chef” plans to range widely from downtown Portland to the greater Oregon region -- which means that the show’s crew and judges will not always be besieged by scenes of protest.