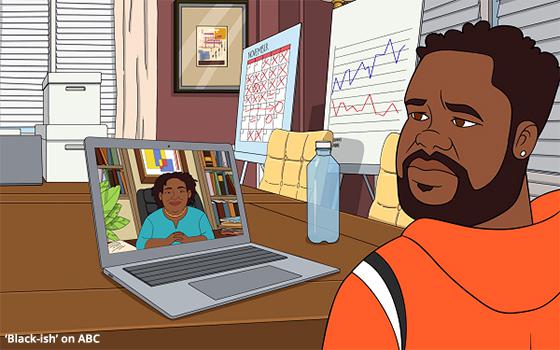 This fall's election season gets a “Black-ish” spin this weekend as ABC packages two back-to-back episodes of the sitcom as a two-part “Election Special.”

The two half-hours -- one done in live action, and the other in animated form -- air at 10 p.m. and 10:30 p.m. Eastern on Sunday night -- a late-ish time period not usually given over to situation comedies.

That's not the only unusual thing about them. The other thing is that they are both newly produced -- which is a relative rarity in prime-time network television in this strangest of all fall TV seasons.

The two episodes are both about politics, but they come at their central subject from different angles.

The first episode is about voting and voting rights -- their history, their historic milestones (such as the Women's Suffrage Act ratified as the 19th Amendment of the Constitution in 1920 and the Voting Rights Act of 1965) and their challenges (including allegations of voter fraud and voter suppression).

The episode's survey of voting history in America gets kicked off when 18-year-old Andre Jr. (Marcus Scribner) is preparing to vote for the very first time and discovers he is not registered, even though he thought he was.

He then gets schooled on the inconsistencies of America's record in granting voting rights to some and not to others.

He arrives at this decision in a moment of anger over the candidacy of another hopeful for the same congressional seat -- none other than his pompous ad-agency boss, Mr. Stevens (Peter Mackenzie).

Unfortunately, Andre knows almost nothing about how to run for political office, and he learns a hard lesson about the pitfalls of accepting cash from a mysterious campaign donor.

The novel innovation of Sunday's second episode is that it is done entirely in animated form (Andre pictured above).