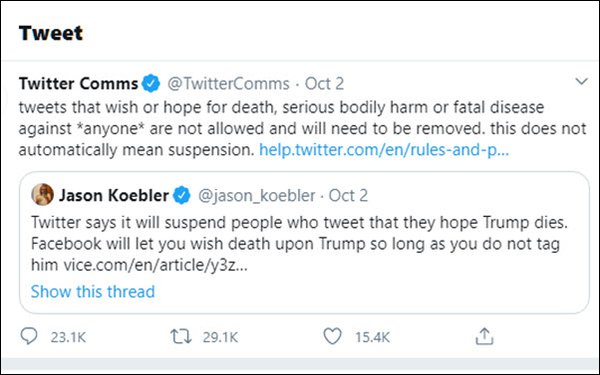 Facebook, Twitter and TikTok have all announced that they are banning messages that express death wishes for President Donald Trump and others.

The announcements follow a rash of messages expressing the hope that Trump dies from COVID-19, after his tweeted announcement on Friday that he and his wife, Melania, had contracted the virus.

“Tweets that wish or hope for death, serious bodily harm or fatal disease against *anyone* are not allowed and will need to be removed,” Twitter tweeted on Friday night. “This does not automatically mean suspension."

“We do not tolerate content that wishes, hopes or expresses a desire for death, serious bodily harm or fatal disease against an individual or group of people… If we identify accounts that violate these rules, we will take enforcement action," a Twitter spokesperson told CBS News, which noted that Twitter has in the past been inconsistent about enforcing its policy of removing threats of violence and hate speech.

After that announcement, the four progressive Democratic congresswomen known as “The Squad” called Twitter out for having failed to take similarly strong actions when in response to the many death threats that have been made against them on social media.

Democratic Reps. Alexandria Ocasio-Cortez of New York, Rashida Tlaib of Michigan, Ilhan Omar of Minnesota and Ayanna Pressley of Massachusetts “have all spoken out about the threats they receive on social media and say Twitter isn't doing enough about it,” notes CNN.

As for other platforms, some blogs initially claimed (above) that Facebook’s policies would allow for making death wishes or threats against public figures as long as they’re not tagged.

But after Twitter’s announcement on Friday, Facebook tweeted: “To be clear, Facebook is removing death threats or content targeted directly at the president that wishes him death, including comments on his posts or his page — in addition to content tagging him."

On Saturday, TikTok told CBS News that "content that wishes the death of any person, including the president, violates our community guidelines, and we remove such content as we become aware of it."