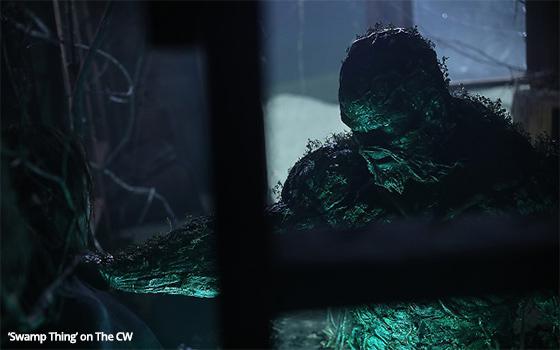 This show -- making its debut with a 90-minute premiere starting at 8 p.m. Eastern -- represents the second time that the DC comic book series has been made into a TV series. It was also a 1982 movie.

In the CW's “Swamp Thing,” the “thing” of the title is really a researcher who is transformed from a man to a “thing” by biology and science that have gone horribly wrong -- a recurring theme in the world of comic books, sci-fi movies and TV shows.

For more information on this phenomenon, please see “The Incredible Hulk” and “The Fly,” to name just two of these.

This new “Swamp Thing” is nothing if not timely. The first episode deals with the outbreak of a mysterious illness that has just begun to wreak deadly havoc among the inhabitants of a small town located in and around the Louisiana bayou.

Into this morass (or swamp, if you will) steps a team from the Centers for Disease Control led by a swashbuckling young woman M.D. (played by Crystal Reed) who is flown in from battling another epidemic in the Congolese republic.

As she picks up the trail of this unknown pathogen, she joins forces with a maverick scientist who thinks he has figured out what this illness is, and how it is spreading.

As you might imagine, the two have a series of adventures -- some in the swamp and some not. And, as is typical of movies and TV shows such as this one, they undertake various activities that got other people killed -- but not them.

In one example, they venture by boat to an area in the bayou where three men met their doom after their boat was attacked by aggressive water vines in the show's opening scene.

But the CDC doc and her scientist companion encounter no such danger. They even come upon the doomed watercraft dangling haplessly from a swamp tree, and then climb halfway into this battered boat to retrieve an abandoned laptop.

Although they avoid calamity this time, the two risk-takers will eventually go too far later in the episode.

While sleuthing through a swamp in search of mutant germs proves dangerous for them, watching “Swamp Thing” turns out to be very easy for the rest of us.

The show is silly, but fun and even suspenseful and scary in parts. Like “Jaws,” which made a generation of moviegoers in the ’70s afraid to go wading in the ocean, “Swamp Thing” will have you thinking twice about venturing into a swamp.